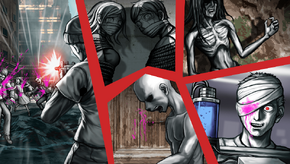 Ultimate Despair is described as a group of people who are "despair in human form". As Junko describes despair as a sort of contagion/state of mind, it can be inferred that the members of Ultimate Despair are those who have been "infected" by despair, and are seen as an extension of Junko's thoughts and will. Their goal is to spread despair across the entire world, driving it into a state of self-destructive anarchy.

They started The Tragedy and kept it ongoing even after their leader's death.

They defied understanding and did various things for the sake of feeling despair and Junko Enoshima: some starved themselves till their bodies were husks, some offered up their parents to Junko to use for experiments on murder, others slaughtered innocent civilians and forced them to kill themselves as a tribute to their dead leader, one removed their own eye and replaced it with Junko's, possibly to see her despair (as implied by a fake version of Makoto Naegi). Kyoko Kirigiri described it as fetishizing one's own despair.

It is also said a member of Ultimate Despair wanted to bear Junko's descendants, and in an attempt to do so took "something" out of her corpse, which most likely was Junko's uterus. This, however, was changed in the localization, very strictly implying necrophilia from a male assailant despite the original implications.

It is notable that although many other members might have done similar things, Nagito Komaeda is the only person whose act was fully established; he took Junko's left hand and sewn it onto himself, resulting in him having a non-functioning left hand.

Another interesting fact is the majority of the people who became Ultimate Despair have their eyes turn gray spirals, red or crimson. However, this is only an aesthetical symbolism of their affiliation with despair. In Izuru Kamukura's case, his red eyes were a side effect from the project that he had taken part in, and in Peko Pekoyama's red eyes being a natural-born trait.

The Brainwashing of Class 77-B

In Danganronpa 3, it is revealed that most of the members were actually brainwashed by Junko using Ryota Mitarai's brainwashing techniques and combining it with the recording of the first mutual killing game and notes on human psychology she stole from Yasuke Matsuda. However, in the case of Class 77-B, Junko combined Ryota's brainwashing techniques with a live feed of their class representative's execution instead.

It's also revealed that after their brainwashing, the members of Ultimate Despair still retain their personalities. However, their minds were conditioned to desire despair similarly to Junko. Upon their "graduation", Class 77-B announced their plans for the world that seemed positive and humanitarian, ranging from yakuza reform to solving air pollution, though all had swirl-patterned eyes like Junko. It's likely that due to now desiring despair like their leader, while they do want those desires to genuinely come into fruition, they all are going to do the exact opposite and are in despair of knowing what they are going to do is far from what they actually intended. With both Nekomaru and Nagito describing themselves and their classmates as Ultimate Despair it implies all were aware of their condition, but by the time Hope's Peak Academy fell they have since embraced it.

The only ones that weren't brainwashed were Izuru, who joined out of boredom/curiosity and isn't shown to be invested in despair, and Mukuro Ikusaba, who only joined Ultimate Despair out of love for her sister. Monaca Towa was also an unofficial member of Ultimate Despair, idolizing Junko and trying to be her successor until she realized just how insane Nagito was about Hope and Despair, frightening her into giving up trying to follow her footsteps.

After their leader died in The Ultimate Punishment, most members of Ultimate Despair followed her example and committed suicide. The ones who survived became known as the Remnants of Despair (絶望の残党 zetsubō no zantō).

Eventually, the Future Foundation secured the custody of fifteen of them - at first only aware that they were survivors from Hope's Peak Academy. When Makoto Naegi, by that time a member of the 14th Division of the Future Foundation, realized that the survivors were in fact, Remnants of Despair, he quickly directed them to Jabberwock Island in secret. Makoto made them enter the Neo World Program, where their memories were reset to a time prior to their entering Hope's Peak Academy, before they were manipulated by Junko - resulting in all of them not recognizing each other. (Excluding Fuyuhiko & Peko) The plan was to overwrite their memories of themselves as Ultimate Despair, replacing them with good ones in order to undo all the damage Junko had done to them.

Unfortunately, this plan failed, as a virus AI of Junko was uploaded by Izuru Kamukura right before they were put into the program. As a result, they ended up experiencing the same violent event that befell Class 78th, albeit in a realistically simulated environment. This came to be known as the Killing School Trip. By the end of the incident, ten of the original fifteen ended up comatose.

The ending of the Danganronpa 2: Goodbye Despair heavily implied that even though the Neo World Program did not erase any memories, the remnants of the Ultimate Despair who made it out of the Neo World Program have kept their memories from inside the Neo World Program, and were assumed to have recanted their beliefs in the concept of despair itself, thus leading them to abandon their status as Ultimate Despair. The surviving Remnants of Despair resided on Jabberwock Island and attempted to find a way to awaken their comatose friends. At the very least, it did undo all of Junko's brainwashing, which allowed them to regain control and Izuru's original self as Hajime.

After the events of Danganronpa 2, the Remnants of Despair still active in the world are few and in disarray for both their decrease in number and their loss of prominent members, like Junko and Izuru. They are described as on the verge of extinction by Monokuma. However, they still continued with their terrorist activities, managing to carry out forty attacks in only a month.

On Jabberwock Island, Hajime, encountering a large fleet of warships, is shown to still have a red eye on the right side (but his usual green eye on the left, to show he's himself once again) due to side effects of the Forced Shutdown that didn't erase his memories as Izuru. Hajime and his friends are rescued by Byakuya Togami's forces, and Hajime is later seen in the Future Foundation Headquarters after presumably defeating several soldiers.

In general, while the organization was active, many of its members have professed their love for Junko, but there are extreme variations of their professions of love. One prominent example of this is when Mikan Tsumiki, who had contracted Despair Disease within the Neo World Program, ended up remembering who she really was before being sent into the program, and then proceeded to kill Ibuki Mioda and the unfortunate Hiyoko Saionji; when she was finally identified as the culprit, she proceeded to profess her love for her beloved and explained that she hoped to meet her in death, which the rest of her classmates did not understand.

The contrast to that would be Nagito, whose machinations in Towa City to "devote himself to despair" stems from hatred towards despair, ironic considering that he was a member of Ultimate Despair. His motive is revealed that just like his motive for trying to start Monokuma's Mutual Killing Game in Danganronpa 2, he wanted to create great despair in order to give birth to a great hope.

Of note is that Ultimate Despair was divided into ranks (mentioned by Mukuro Ikusaba in Danganronpa IF).

Their relationships with Junko never seemed to extend beyond idolatry. The Remnants of Despair became that purely because Junko had died, and the act of sewing her body parts onto themselves forcibly is evidence of idolization. Junko has never professed any love for the members of Ultimate Despair, save for her own sister Mukuro, but this was because she would, instead, induce "despair" in them in the name of love.

What is very clear, however, is that while members are mostly disparate, separated units who may choose to act alone (which they often do, as evidenced in the uprising in Towa City), their main goal was always to spread despair.

Most of Class 77-B still maintained camaraderie and friendship even after falling into despair. Peko continued to loyally serve Fuyuhiko as an Ultimate Despair, and during a battle with some of the leaders of Future Foundation, Nekomaru and Akane aided Peko. Ibuki and Hiyoko hosted a concert and used their talents to spread despair. Mahiru snapped photographs as Sonia used her talent to rally a brainwashed army.

The only one who never established any known relationship with other Ultimate Despairs (except Junko and Mukuro) is Izuru. Despite being made into a well-known figurehead of the Ultimate Despair, in actuality, Izuru merely observes the battle between Hope and Despair. Furthermore, upon his request, Junko had erased any memories the Class 77-B has of Izuru, while he also erased his memory of Class 77th, so that he would not be bored when he meets the Remnants of Despair again. It is unknown if they worked together during the Tragedy.

All of the information regarding Kokichi being a Remnant of Despair was forged by the true mastermind to make the participants believe that Kokichi masterminded the Killing School Semester.