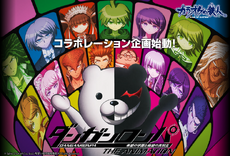 The Danganronpa Cafe was a cafe collaboration effort between Spike Chunsoft, カラオケの鉄人 King of System (Karaoke no Tetsujin) and merchandising company Good Smile Company (グッドスマイルカンパニー). It offered themed food dishes and drinks based around Danganronpa: The Animation to promote its release. It was initially located at the Good Smile x Karaoke no Tetsujin Cafe in Akihabara, Japan. It ran from August 20th, 2013 to September 29th, 2013.

From December 4th, 2013 to February 2nd, 2014, the collaboration later moved to two Karaoke no Tetsujin locations, both located in the Ikebukuro district of Toshima, Tokyo, Japan, with a more limited menu. At this location, the ending theme for Danganronpa: The Animation - Zetsubōsei: Hero Chiryōyaku - was available for karaoke.

The following options were available at the Good Smile Cafe x Karaoke no Tetsujin cafe, priced at 480yen. Buying a specific drink would grant the customer a coaster featuring that character.

Six additional drinks were available during the Sept. 10th - 19th limited period. These drinks were based on Byakuya Togami, Toko Fukawa, Sakura Ogami, Mondo Owada, Hifumi Yamada, and Chihiro Fujisaki, respectively. The drinks for these characters contain the same ingredients as their counterparts on the Karaoke no Tatsujin drinks menu, which can be found below.

The following drinks were available at the Karaoke no Tatsujin cafe locations, priced at 550 yen.

The cafe featured large scroll posters suspended from the ceiling, and displays featuring many stills from the Danganronpa: The Animation. A selection of merchandise was also on display in cases, with particular focus on Good Smile Company's Nendoroid figures of Makoto Naegi, Monokuma and Monomi.

Tables were covered in one of three decorative placemats featuring Danganronpa: The Animation characters.

The cafe was decorated with large images of promotional illustrations and screencaps from Danganronpa: The Animation. The small tables featured bust-up portraits of the cast, and the booth tables featured the Hope's Peak Academy insignia.

Also on display was merchandise with mugs featuring the cast of the anime, and some with members of the cast from Danganronpa 2: Goodbye Despair. Along with the mugs, the paper-craft model kits GraPhigs were on display.

With each food a drink purchase at either location, a customer could use a gashapon machine to receive a free can badge.

With each food purchase, the customer would receive a free paper placemat. The customer could have it laminated for an extra fee. 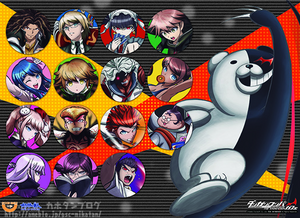 Purchasing a drink would grant the customer a coaster. There were two sets of coasters, with the second set released with the Sept 10th - 29th limited menu.

Purchasing a drink would grant the customer a coaster matching the corresponding drink.

Retrieved from "https://danganronpa.fandom.com/wiki/The_Danganronpa_Cafe?oldid=255670"
Community content is available under CC-BY-SA unless otherwise noted.