View source
watch 02:19
Wiki Targeted (Games)
Do you like this video?
Play Sound

The Caged Child (かごのこ Kago no Ko) is a song featured in Danganronpa V3: Killing Harmony chapter 3, and is sung by Korekiyo Shinguji, Himiko Yumeno, Kokichi Oma, and Shuichi Saihara.

It is performed by the characters' voice actors in both the English and Japanese dubs. It is the first song featured in a Danganronpa game to be dubbed into English by English voice actors. An instrumental version of the song is featured on Danganronpa V3: Killing Harmony Original Soundtrack White.

The sheet music for The Caged Child, and the Japanese lyrics, were included in the Danganronpa V3 artbook "New Danganronpa V3: Minna no Koroshiai Shin Gakki Chō Kōkō-Kyū no Kōshiki Settei Shiryōshū" 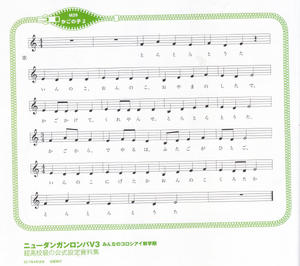