The participants of Takeda Haunted Mansion Case are members of the Detective Library, with Gekka Ryuzōji as the host.

It was apart of the Twelve Duel Noir Challenge, organized by Gekka as a test especially for Yui by summoning her as a detective. 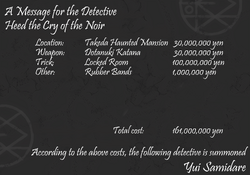 Yui and Kyoko once again make their way to the train station and head off to the Takeda Haunted mansion, to participate in the next Duel Noir Challenge. Rumoured to be haunted by spirits, located up towards the mountains. Arriving to the Mansion, the two made their way through an old gate, finding at least five pairs of shoes near the entrance. Making their way through the hallway someone was calling for help. Nearing the door, Yui attempts to open it with no success as it couldn't budge. The other detectives summoned to this Duel Noir consist of Hajiki Yaki, Sachi Mizuiyama, Korisu Kakitsubata, and Salvador Fukuro Yadorigi. Hajiki attempted to force open the door yet again, complaining about a resistance pulling back. Kyoko reminded Yui that the challenge card listed rubber bands as an item, and just as she was about to act, a strange noise emit from the room- An object crashing, a man's muffled voice, another heavy object collapsing on the ground with vibrations, then silence. Hajiki then attempted to pull open the door, which faintly revealed some rubber bands tied to the doorknob, in which Salvador cut open. After the door was forced open, a sight of an elderly man laid face down, a katana lodged deep in his back had taken his life. Two empty suits of armour surrounded the corpse, giving the crime scene a bizarre look. The man was then identified as Suntetsu Shirasu.

The investigation began, with the suits of armour inspected, along with the outside courtyard and the pairs of shoes as well. At midnight, police, officers and forensic officers streamed into the mansion, taking their own way into the investigation. The others claim they were lured to the mansion by a fake invitation, in which they arrived with no guest. The officers then began questioning the group. Salvador then explained the timeline of the events to the two - The group arrived at the mansion at 1PM, in which Yui unsealed the envelope an hour later. The group then waited until 3PM in which the host never showed up, in turn they explored the mansion themselves. They started questioning the legitimacy of the request at 9PM, in which they were prepared to leave until Korisu revealed herself as a detective, in which the rest did so as well. At that time, Shirasu had gone missing. At 10PM the door was sealed shut. In the next 30 minutes Hajiki, Sachi and Korisu appeared, sharing their findings. After that is when Kyoko and Yui showed up.

After the explanation, they continued on investigating; In which the officer's conclusion of a suicide was refuted by Kyoko. She then measured the shoe sizes of the rest of the group, and went outside to the watermill to take notice in an interesting mechanism that was used for the murder. Concluding the search she makes her way into the mansion, explaining to the rest of the officers the tricks and structure of the murder trick. She explained that one of the group members took advantage of the trick. One of the officers requested that Sachi go through the small opening of the door to prove the theory, but as she refused she was lead out of the room by the officers. As the case concluded, the officers then escorted everyone out of the mansion, Kyoko then revealed to a shaken Hajiki that Sachi being the 'culprit' was an act to bring the real killer's guard down. As Yui, Kyoko, Hajiki and the police officers distanced themselves from the mansion, the real culprit was in the process of destroying the evidence not until the car's lights shone on them; Revealing themselves to be Korisu Kakitsubata.

As the years went forward, the Takeda Haunted Mansion Case become somewhat of a cult phenomenon, likely due to the method of killing being so obscure and convoluted. During the World Domination Proclamation in Prague, the 'Mystery Kenkyūkai' of Hope's Peaks Junior High School, started to create Operation Global Locked Room Transformation. One of the many murders the Mystery Kenkyūkai admit to was based on the Takeda Haunted Mansion case, where they stabbed a Citizen of Cesky raj in the chest with a dotanuki sword.