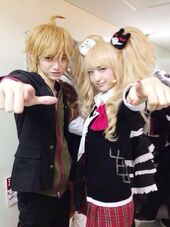 Stage actors are people who behave in the manner of a character, usually by reciting scripted dialogue, in order to entertain an audience on the stage.

Until now, two main games of the series, Danganronpa: Trigger Happy Havoc and Danganronpa 2: Goodbye Despair has been adapted into stage play. Characters are portrayed by stage actors.

Stage play and stage actors within the Danganronpa franchise include:

All stage play adaptation has been produced by Cornflakes.