The New Danganronpa V3 Official Setting Materials Collection (ニューダンガンロンパV3 みんなのコロシアイ新学期 超高校級の公式設定資料集) is a paperback art book that collects together various art assets and material for Danganronpa V3: Killing Harmonys beta designs for the characters, CG illustrations, storyboards for executions, and so on.

Both the front and the back cover illustrations were designed and drawn by long-time Danganronpa artist Rui Komatsuzaki.

On pages 1 - 13 are clean scans of the art work used in various promotional materials such as magazine covers and pre-order art. All of which were illustrated by Rui Komatsuzaki. 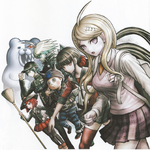 On pages 14 - 179 are detailed profile pages about the New Danganronpa V3 characters, including the students, the Monokumarz, and Monokuma.

The first page of each profile section shows the illustration art of the character, the character name in kanji and romaji in large text at the top, a very brief overview of character details such as their birthday and height on a clipboard style graphic, and who their "character voice" is as well as including a short comment by them about the character they voiced.

The second page has a full body front and back illustration of the character with notable details pointed out, a head shot sketch of the character, the symbol for the characters' Former High School, and a "Creator Comment" from Danganronpa writer and creator Kazutaka Kodaka, where he writes about his personal opinion on a characters' personality and design.

The follow pages (the number varies from character to character depending) contain Face Variations and Dot Patterns, which are the characters' sprites and pixel art respectively. Each page contains full body sprites and half body sprites, with a bullet point under each sprite with a brief description of what emotion the sprite portrays.

On the last page of the sprite sections, half of the page on the bottom contains all pixel arts for each character that are used in the New Danganronpa V3 Omake Mode.

Named Character Profiling, the follow page has the full body sprite of the character, with "Checkpoints" indicating and describing notable details about the character such as unique clothing choices and their underwear. One each side of the sprite, there are four gifts listed that the character both loves and hates with a small summary explaining why under each gift.

At the bottom of the page are Research Lab "Checkpoints!", where the Monokumarz point out four notable areas in a characters' Research Lab give short comments on each point.

On the last page is a section describing important points for what the character did during the game's main plot and a section with a relationship chart. The important points section is divided up into two sections, labeled Keyword and Saying, and under the sections are sub-headers with character-specific points and under those are more details about said sub header with notable CGs, screenshots, and sprites from the game to better illustration the descriptions.

The relationship chart details how the other students (and Monokuma) feel about the character in question. The "feelings" are one or two short statements, often humorous in nature, with an accompanying sprite to better convey the emotions that particular character feels about the other.

On pages 148 - 151 are all 16 of the Students' full body sprites dressed in their Former High School Uniforms as well as a short description about them.

On pages 156 - 178 are various beta illustration designs for all 16 students. On the side of each beta illustration has a "concept descriptor" the character was originally designed under, an example being エキゾチック少女 (Exotic Girl) for Angie Yonaga, the design itself with notable points, and a "Creator's Comment" by Kazutaka Kodaka about the design.

On pages 182 - 225 are all of illustrated CGs seen in the game. They are separated by chapter, starting with the Prologue and ending with Chapter 6. Some of the CGs have sketch draft artwork next to them.

On pages 258 - 269 are still images from the animated oshioki ("Punishments"), also known as Executions. Each oshioki has two pages dedicated to it, along with still images there are some illustrations cut out to highlight notable ones and on the bottom of the second page is a "Creator's Comment" by Kazutaka Kodaka. The oshioki are Neko Funjatta in Chapter 1, Kumon no Ito in Chapter 2, Konjaku Shioki Emaki in Chapter 3, Bugs Panic in Chapter 4, New Uchūryokō in Chapter 5, and Saishū Gakuen no Hakai in Chapter 6.

On pages 270 - 291 are the various assets seen and used during the Class Trials such as sprites and cut-ins as well as more miscellaneous material such as introduction cards and drafted logos for cover art of the game.

On pages 270 - 273 are all of the Debate Scrum, full and half body, sprites. The sprites are facing both the left and right side depending on which character it is, including some characters even having both directions. The half-body sprites are when the character is refuting/speaking. All of the sprites have captions next to them and under them. The captions next to the sprite are the statements they use to refute, and the captions under are the characters' names.

On pages 274 - 277 are the various "cut-ins" seen during the Class Trials. This includes the other student Objections, "NO THAT'S WRONG!" objections, "Consent", "I Got It!" cut-ins, and the player's team winning the Scrum Debate.

On the bottom of page 278 are the logos seen for ten of the past seasons of Danganronpa hosted by Team Danganronpa as well as a "Creator's Comment" by Kazutaka Kodaka.

On page 279 are all of the animated "cut-in" introductions for each student. Each card has a colored background for the character and the characters' name and talent. There are also cards for Junko Enoshima from the 53rd Generation and the updated talent for K1-B0, Super High School Level Hope Robot.

On pages 280 - 283 are the backgrounds and scenery illustrations seen in the game. Each illustration is devoid of sprites or any other obstructions. There are "Creator's Comments" by Kazutaka Kodaka on two of the pages.

On the top of page 284 are still images of the 3D modeled material in the game. This includes the MonoMono Machine, the Deceased Portrait Strands, and Maki Harukawa's Crossbow. Each model has two to four still images showing off all of the angles.

On the bottom of the page are the graphical details for the MonoMono Machine.

On the top of page 285 is a still image of the vault that's shown locking the students in the Saishū Gakuen.

On the bottom of the page are two illustrated sets of Zodiac symbols themed around Monokuma, one set being the Western zodiac and the other being the Chinese zodiac. Each Monokuma represents a star sign or animal. 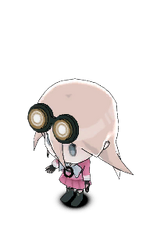 On pages 286 - 287 are the various materials for the assets used in the Neo World Program. On the top of page 286 are the "chibi-style" 3D models for Shuichi Saihara, Kaito Momota, Maki Harukawa, Miu Iruma, Gonta Gokuhara, Kokichi Oma, K1-B0, Himiko Yumeno, Tsumugi Shirogane, and a shadow figure. On the bottom of the page are the expressions used by the aforementioned characters.

On page 287 are the 3D modeled maps used in the New World Program.

On top of page 288 are the beta draft designs of the logo for Saishū Gakuen. There are 13 in total and a lengthy "Creator's Comment" by Kazutaka Kodaka.

On the bottom of the page are the Japanese title cards for the executions.

On top page 289 are the beta draft designs of the box art for New Danganronpa V3: Everyone's New Semester of Killing. They are separated into sections lettered A through G with three to six draft designs per letter.

On pages 314 - 315 are the "rough sketches"/unused drafts of the various promotional illustration art such as magizine covers and pre-order bonuses.

In a number of sections there are pages with the title "BREAK!!!" followed by the name in kanji, typically covering only one or two pages each, which feature content in the section it relates to that is not big enough for its own section but still interesting enough to highlight.

On a few of the pages, there is a small "Top Secret" section. Anything titled under "Top Secret" are material that didn't make it into the final game for one reason or another.

On pages 318 - 329 are details and guides on the various games in "Omake Mode" At the start of each section there is a short paragraph explaining what is on the pages.

Pages 318 and 319 are details, "how-to-play" guide, material, and images from the alternative universe dating sim mode called "Uchū Isshū Rabubaraetida n Gan Benizake-Dan" (宇宙一周ラブバラエティ・だんがん紅鮭団), and on pages 320 and 321 is a complete guide to presents. The guide includes all of the available gift-able presents and which one each students loves, likes, dislikes, and hates. The guide also marks what presents are casino only and what presents will trigger special CG events.

Pages 322 and 323 are details, "how-to-play" guide, material, and images from the alternative universe "Chō kōkō kyū Kaihotsu Hochihatsu Keikai Gakaku" (超高校級の才能育成計画). On pages 324 and 325 are all of the pixel sprites used during the Board Game Mode and Dungeon Crawler Mode.

Page 326 is details, "how-to-play" guide, material, and images from the "Zetsubō no Danjon Monokuma no Shiren" (絶望のダンジョン モノクマの試練). On page 327 are all of the pixel sprites of the monsters fought in this Mode.

Page 329 are details, "how-to-play" guide, material, and images from the "Zetsubō Desurōdo" (絶望デスロード). On page 330 - 333 are all of the sprites of the students seen during gameplay for this Mode.

Pages 334 - 335 are details and models of the Hidden Monokuma collectable items as well as screenshots on where to find them within the game.

Pages 336 - 337 are details and a by chapter guide on how to commit "Perjury", or rather the "Lie Routes" within the Class Trials.

Pages 338 - 349 are various interviews with the creative team behind the game, such as Kazutaka Kodaka, Masafumi Takada, and Rui Komatsuzaki accompanied with images and screenshots to better illustrate the text. The interviews often given insight on the creative team's views of the game as well as cut content and content changed during development.

On the final page 352 is the sheet music for the song in Chapter 3 "Kago no Ko", preformed by Korekiyo Shinguji, Himiko Yumeno, Kokichi Oma, and Shuichi Saihara. 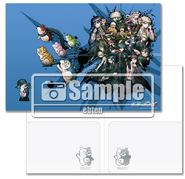