Inadvertently destroyed by K1-B0 during his fight with the Exisals

Motherkuma (マザーモノクマ Mazā Monokuma), Mother Monokuma in the original Japanese, is a minor antagonist introduced in Danganronpa V3: Killing Harmony. It was created by Team Danganronpa to act as one of the observers of the Killing School Semester behind the scenes along with the actual Mastermind.

Motherkuma's primary purpose is to create new Monokumas. This is done when the Mastermind, later revealed to be Tsumugi Shirogane, says "birth a new Monokuma", triggering Motherkuma's voice recognition software. It supposedly uses the large machine behind it in order to create spare Monokumas.

Motherkuma is also connected to the Nanokumas, microscopic Monokumas that come in swarms and act as the surveillance cameras for the Ultimate Academy for Gifted Juveniles. The footage they record is sent wirelessly to Motherkuma, effectively making it the hivemind of all Nanokumas.

Motherkuma appears as a giant Monokuma head in a large glass jar with countless wires going into it. The only difference is that the white half of the face is instead exposed, allowing one to see all the components within the robot. The left eye is also a circular blue disk instead of the traditional normal black eye.

Due to Motherkuma's overall function and design, it is confined to and cannot leave the hidden room in the library.

Motherkuma has the same overall personality as ordinary Monokumas, as it mentions that Monokumas have its copied thoughts and it technically gives birth to itself. When the students met it for the first time, it tried to come off as very threatening at first and gave the impression that it was an extremely important final boss, but it was soon revealed to be rather harmless and a bit comical.

Fitting its name, Motherkuma seemingly acts quite motherly towards the Monokumas it gives birth to. It mentions that it wishes to give birth to lots of Monokumas, but only into a safe environment where they are accepted. When the students try to order it to give birth to a new Monokuma to prove its claims, it refuses and acts offended, acting like a woman who doesn't want a child with an irresponsible person they don't like. It later explains that it gives birth only when hearing the Mastermind's voice, to ensure that the Monokumas are born into a welcoming environment.

It is rather talkative and willing to give the students hints because it believes the killing game is eternal and simply cannot be stopped.

During the time limit motive in Chapter 1, Tsumugi Shirogane, frustrated that a killing had yet to happen, went to the girl's first-floor bathroom in order to use the hidden passageway to get into the hidden room. There, she conspired with Motherkuma and watched everything in the library unfold. After witnessing Kaede Akamatsu's plan fail to kill Rantaro Amami, Tsumugi rushed into the library in order to finish the job herself, Motherkuma acting as an accomplice for the murder.

After the fifth trial had concluded, Tsumugi headed back to the hidden room for a brief period of time, cosplaying as Junko Enoshima, proudly declaring to it that the killing game would go on forever.

Motherkuma congratulated them all for finding this place, purposefully not mentioning its connection with Tsumugi as to not give away her position as the actual Mastermind. Motherkuma instead gloated about being able to create spare Monokumas. The remaining survivors tested this claim by asking it to "birth a new Monokuma', not yet realizing that Motherkuma would only create spares if Tsumugi said birth. To keep her position hidden from the group, Tsumugi said "make" instead of "birth" so as to not trigger Motherkuma's voice recognition software. Unable to figure out anything else from Motherkuma, and investigating the remainder of the hidden room, everyone but Himiko left the room and headed back into the library to find K1-B0 in a heated battle with Monotaro in his Exisal. During their fight, the way back into the hidden room ended up being blocked by rubble, supposedly trapping Himiko inside and heavily damaging Motherkuma.

After Shuichi finished investigating the classroom that could make Flashback Lights, Himiko suddenly came in, surprising Shuichi since he and the others thought she was trapped. Himiko then explained and showed him the hidden passageway in the girl's bathroom that led into the hidden room. There, they found Motherkuma knocked away from the machine, only barely being connected to it by wires. Motherkuma bluntly stated that it wouldn't have much time left, but did give the survivors one final hint, stating that it would only birth a Monokuma if the "designated person" was the one who gave the order, surprising Shuichi. Upon giving this hint, Motherkuma laughed, proudly declaring glory to the killing game before finally shutting down completely.

Sprite used in the text logs 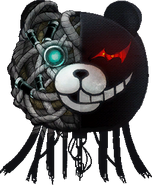 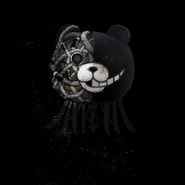 Retrieved from "https://danganronpa.fandom.com/wiki/Motherkuma?oldid=335489"
Community content is available under CC-BY-SA unless otherwise noted.