watch 02:44
The Loop (Games)
Do you like this video?
Monokuma Kubs
Gallery

The Monokuma Kubs, or "Monokubs" for short, (モノクマーズ Monokumāzu lit. Monokumarz), also known as the "Children of Monokuma", are a group of five child-like robots that claim to be the children of the malicious robotic bear, Monokuma featured in Danganronpa V3: Killing Harmony.

They work under their father in Ultimate Academy for Gifted Juveniles, supervising the Killing School Semester with their "Exisal" mechs, monkey-shaped killing machines.

The Monokubs are Monokuma Units featured with five different colors. They are red, blue, yellow, green and pink. Each of the Monokubs has a different major personality trait, with Monotaro being the clumsy leader, Monophanie being the kindest one, Monokid being loud and wild, Monodam being quiet and shy because of his history of him being bullied, and Monosuke being the more money orientated type. The Monokubs also have a notable unique object for each of them such as a scarf, a guitar, a flower, and a pair of glasses. All of the Kubs have their own version of Monokuma's signature laugh "puhuhu" ("upupupu" in the Japanese version) and they repeatedly refer to the students as "you bastards", clearly copying their father's way of speaking.

Strangely, the Monokubs appear to bleed when they receive serious damage, despite being robots. They also seem to have the capability to eat and sleep, as they are often seen eating and repeatedly mention that they sleep during night time, though it's possible that they are just acting like their father sometimes does.

They use their Exisals for guarding and building the school building, as well as to reprimand and threaten the students. They deliver messages from Monokuma to the students and in general attempt to answer some of their questions, though sometimes they just seem to speak nonsense. They also take care of the official school announcements, with one of them being in charge of each announcement.

It's been mentioned that the Monokubs do not seem to have much loyalty or care towards each other, which is why Tenko Chabashira's idea to use one of them as a hostage was turned down.

It is unclear how sentient they are and how much they know, though there is some implications that they are in a way victims of the situation as well. While they can be sadistic, it seems they are mostly motivated by their fear of Monokuma. They are shown to be genuinely sad when their father turns increasingly cruel and abusive, and they mention that their father used to love them so much in the past. During the last trial, Monokuma decides to destroy them all simply because they are not useful nor needed in the story, causing the Kubs to genuinely panic. In the end, they end up crying and desperately begging for their lives, shouting in fear that they do not want to die and that they don't know anything. In the bonus modes, it's shown that they do whatever jobs Monokuma gives them, even if they're highly different from killing games and not something they like.

According to Kazutaka Kodaka, the Monokuma Kubs were created quite late during development, after the staff pointed out that it looked quite empty to have Monokuma alone without other mascot characters by his side. Thus, the Monokuma Kubs were created, with the joke being that they don't have any actual purpose in the story. This is lamp-shaded by Monokuma during the game when he grieves all of their deaths only to wonder why they even existed in the first place. [1]

The Kubs are a reference to one of the popular Tokusatsu Series, "Super Sentai". They each correspond with the main team's traditional colors (red, blue, yellow, pink and green) and consist of four male members and one female member with the leader wearing red.

One of Monomi's beta designs show her wearing a pacifier may have inspired the design of the Monokubs in Danganronpa V3: Killing Harmony.

Considering the fact that the Kubs are child characters without any actual roles or purpose, and the fact that Team Danganronpa's series is portrayed as one that has continued way too long and seemingly even begun to copy ideas from other franchises, the Monokuma Kubs may be in-universe examples of kid characters who are added into a series to boost ratings even though the audience often feels there isn't any need for them.

The Monokubs first show up riding the Exisals. When all 16 students are corralled into the gym, the Monokubs arrive and jump out of their machines and introduce themselves as the "Monokubs". The Monokubs state they removed certain memories from the students, such as their talents and parts of their past, and then use a Flashback Light to restore the students' talents and some of their memories. Later after the students finished introducing themselves to each other, the Monokubs make an announcement to meet later in the gym again to tell them about the Killing School Semester. At some point, Monokuma appears out of the gym and the Monokubs are very happy to see their "daddy".

When Kaito Momota commits violence against Monokuma, the Monokubs appear to make the example of what happens when they break a school rule. When Monokuma explodes and "dies", the Monokubs begin to cry for their father, thinking he is truly gone and vow to avenge his death.

During the class trial, the Monokubs don't do anything to assist but make jokes and chat among themselves during everyone's discussion. Once Kaede is found out as the supposed "blackened" however, they all begin to look forward to a "grotesque scene" and assist during her execution. Before the piano cover can come down and crush her, Monodam pushes his brother, Monokid, into the execution, causing the cover to crush him as well and kill him.

Monotaro, Monophanie, and Monosuke are all shocked and confused as to why Monokid was executed as well where-as Monokuma simply brushes it off and states that he at least has four more kids. After Monokuma leaves, the remaining Monokubs question Monodam, but he simply states that it was "For their own good" before leaving as well. Monotaro and Monophanie are both still bewildered, but Monosuke doesn't think much of it and simply states that Monodam killed Monokid because he was bullying him. After this, the remaining Monokubs leave the participants of the Killing School Semester alone.

During Kirumi Tojo's execution, Monodam once again murdered one of his siblings, in this case, Monosuke. He pushed him down onto the ground, causing his glasses to fall off and being unable to see. By the time he got his glasses back on, Kirumi's body had already fallen on him and crushed him.

Chapter 3 - Transfer Student From Beyond the Grave

At some point, Monodam turns against Monokuma, accusing him of treating his children like slaves. Since the Monokubs have Exisals on their side, Monokuma is forced to surrender. Monokuma seems to be happy about the Monokubs. He then decides to take a vacation.

During Korekiyo Shinguji's execution, Monodam commits suicide by rushing past Monotaro and Monophanie and into the flames that were boiling Korekiyo alive, causing them to burn even more.

Monotaro suffers with major memory loss where he becomes more and more confused about his identity. He comes to believe that he is the drunken husband of Monophanie and also thinking that Miu Iruma and K1-B0 were his parents, a role that Miu happily took up while K1-B0 didn't. Monotaro then began to act romantic towards Monophanie, saying he had never thought of her that way before. However, the next morning, he is seen acting completely different, kicking a crying Monophanie and demanding she give him money like an abusive husband, seemingly due to his memory issues. Because of this, Monophanie hides, causing Monotaro to panic since he can't remember anything. However, Monophanie feels bad for him and later takes him back, and he apologizes as the two of them cry. The announcement then ends with "the end", as if it were all theater.

The remaining Monokubs later appear when Miu is found dead. Very upset to see his adoptive "mother" was murdered, Monotaro ended up assisting the students in solving the murder to avenge his dead mother by hacking into the Neo World Programs via the main computer inside the Computer Room.

During Gonta Gokuhara's execution, Monophanie was killed from having a giant, insect-like creature burst out of her chest, which promptly sliced Monotaro in half, destroying them both.

Chapter 5 - Voyage Without Passion or Purpose

After Kaito Momota's execution, all five of the Monokubs are revealed to have been rebuilt and are active once again.

The Monokubs once again appear along with their father to stop K1-B0 from destroying The Ultimate Academy and try to destroy him using the Exisals.

Along with their father, all five Monokubs are present during the final trial and are much more vocal, and invested into the discussion this time than they have been in any prior trial, actively trying to refute evidence that the survivors present and participating in Nonstop Debates and even engaging two Rebuttal Showdowns.

Despite them all being brought back, Monokuma had a self-destruct button prepared which he promptly uses to destroy the Monokubs once again when they got on his nerves or did anything to anger him. By the time Tsumugi Shirogane was revealed as the mastermind, all five of the Monokubs were destroyed one-by-one throughout the trial, supposedly ending them for good.

Monokuma is the self-proclaimed father of the Monokubs. He calls them his "adorable children" and seems even disturbingly attracted to them because they look like him and he loves his own looks.

While Monokuma seemingly acts sweet towards his children at times, he seems to be neglectful and violent most of the time, punching or otherwise physically abusing them if they annoy him and overall acting very passive aggressive. Considering himself the headmaster, he seems annoyed if his children try to steal the show, with him even stating multiple times that he tolerates them only because they are so cute.

Monotaro and Monodam usually refer to him as "father", while Monokid calls him "Papa Kuma", Monosuke as "pops" and Monophanie as "daddy". Out of all the Monokubs, Monokuma seems to like Monophanie the most due to her unique kind personality and general cuteness, creepily stating that he could eat her up, which startles even her.

In Chapter 3, Monodam forcefully takes Monokuma's place with the help of the Exisals, accusing him of treating his children like slaves. The Kubs also accuse him of being too old for his job. Monokuma seemingly begins to lose his hair over this and becomes unresponsive in shock for a while, though another copy of him appears later claiming that he'd just been on a vacation and left the job for his Kubs and the balding substitute.

Monokuma doesn't really seem to care whenever his Kubs die, and he even decides to kill Monotaro and Monophanie himself during Gonta's execution in Chapter 4. He gives a petty excuse saying that they had been spending time together and ignoring him. He quickly feels a mix of sadness and amusement and then laughs it all off by stating that he's probably never going to get the hang of the whole parenting thing. 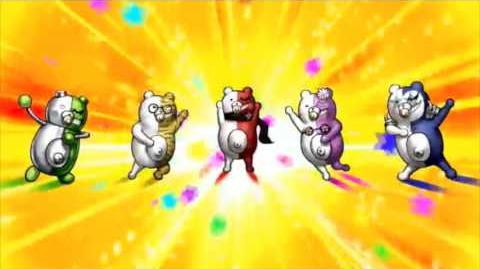 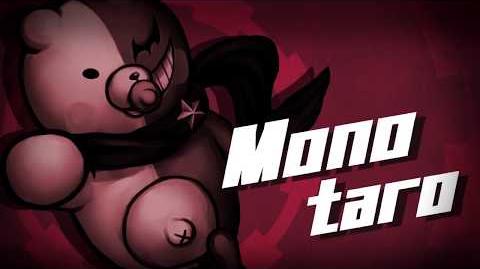 Monokubs Introduction (English)
Add a photo to this gallery

The link below lists all official licensed merchandise featuring Monokubs:

Appearances in Other Media

Retrieved from "https://danganronpa.fandom.com/wiki/Monokuma_Kubs?oldid=351986"
Community content is available under CC-BY-SA unless otherwise noted.