This article includes a list of items that can be collected during Danganronpa: Trigger Happy Havoc.

There are four types of items, and 114 items total:

MonoMono Machine items can be given to other students to increase Makoto's relationship with them. Post-chapter completion items are automatically awarded after completing a chapter's class trial. Underwear items are awarded if Makoto completes a student's School Mode route. The 2 bonus items will each unlock additional cutscenes. 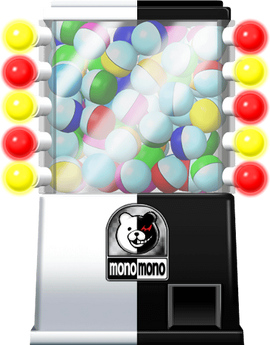 The Escape Button will only appear at random in the MonoMono Machine after you have completed Chapter 6. Obtaining it will unlock a bonus scene in the Movie Gallery of the Main Menu. This scene is an alternate ending, in which all of the students escape through the sealed vault door. It is likely this scene was made for the scrapped alternate ending, Danganronpa Another End. The same cutscene was later used for the climax of Danganronpa IF.

During Free Time Events, Makoto will have the opportunity to give the student of their choice a gift from the MonoMono Machine. If they are given a gift that they like, it will increase their friendship. Each student has their own preferences, and the following pages highlights the gifts which give the most positive response.

There are four trophies/achievements associated with Presents and the MonoMono Machine.

trophy Rogues Gallery, in which the player must unlock all gallery items, requires the player to have collected A Man's Fantasy and Escape Button and unlock the associated cutscenes. In the Danganronpa 1.2 Reload release the only trophy associated with the Monomono Machine is the

trophy Seriously, You Shouldn't Have for collecting all presents.