Horde Battles
Magical Girl Miracle ★ Monomi (魔法の少女奇跡★モノミ) is a minigame available in Danganronpa 2: Goodbye Despair. It follows Monomi as she sets out to defeat each of the Monobeasts guarding the bridges leading to the other areas of Jabberwock Island. 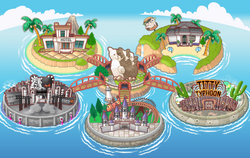 The player plays as Monomi, who must defeat various monsters and Monobeasts. The first stage is unlocked after Chapter 1 is completed in the main game, with subsequent stages being unlocked at the beginning of each new chapter. Each stage is themed after a different island, and the stages backgrounds include notable areas from each island, such as the cinema, Monokuma Rock, and Nezumi Castle. At the end of each stage, Monomi has to defeat a Monobeast boss in the final wave.

Monomi can attack by jumping on enemies (apart from spiked ones), but her primary ability is Magic Circle, which involves creating trails of magic behind herself as she runs. If she can make a closed shape, a burst of magic appears within the confines of the trail, damaging enemies in range. Monomi's speed is boosted while trailing magic, but prolonged use can tire her out, leaving her slowed and vulnerable for a few seconds.

Dealing damage to enemies adds to Monomi's "Hope Meter"; when it reaches 100%, she can transform into Usami, gaining invincibility and unlimited magic power for as long as the transformation lasts. Any enemies defeated during the stage have the chance of dropping a number of items, including recovery items, gold bars (every 10 gold bars is converted to 1 Monocoin at the end of the stage) and Present Boxes which will give Monomi a random item.

After defeating any enemy type, there is a chance they will drop items which will aid you.

Equipment is found in present boxes, which drop at random from enemies, and must be quickly collected before they despawn. Collected items can be found in the Equipment menu on the Main Menu screen, and are split between three types - weapons (sticks), head armor (ribbons), and leg armor (underwear). Each piece of equipment has different stats, and some grant passive abilities.

The most powerful equipment pieces in the game are Seventh Sea Hope Rod, Autumnal Hope Ribbon and Hope Cloth Beam 1000, granting around 900 total for every stat. All 3 pieces are available from Stage 5 and beyond on Normal difficulty, but are easiest to obtain by playing the Secret stage on Hard.

If you are pursuing the "Monomi Won’t Miss These, Right?" trophy, which requires you to collect every equipment piece, obtain the leg armor item Old Man's Grass Skirt as soon as possible, as it dramatically increases the drop rate of present boxes. Additionally, the ribbon 2 Tax Gold will increase the number of gold bars dropped, which will in turn increase how many Monocoins you will receive at the end of a stage.

Although the items received in Present Boxes are random, different sets of equipment will drop depending on which stage and difficulty you are playing on. Below is a list of known drop locations for each item. Regardless of whether you complete a stage or if you are defeated, you will still receive any present items you pick up during the stage.

NOTE: If you are aiming to collect every piece of equipment, it is recommended that you obtain the leg armor Old Man's Grass Skirt as soon as possible, as it increases the drop rate of Present Boxes.

There are two PSN trophies / Steam achievements associated with this minigame: