Danganronpa Wiki
Register
Don't have an account?
Sign In
Advertisement
in: Characters, Danganronpa Another Episode Characters, Antagonists,
and 9 more
English

View source
watch 02:46
The Quarry - The Loop
Do you like this video?
Play Sound
Kurokuma
Gallery
Sprites

Kurokuma (クロクマ) is a stuffed robotic bear that appears as an ally to Warriors of Hope who features as one of the mascot characters in Danganronpa Another Episode: Ultra Despair Girls. 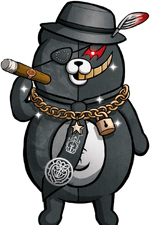 Kurokuma's body is half dark-grey and half black split equally down the center. It seems his right half was originally white like other Monokumas, and he simply painted over it.

Kurokuma wears a dark-grey fedora hat with a red and white feather on it. He has gold teeth and he smokes a cigar. He also wears an eye-patch with a heart decal over the right eye, a black tie, and a golden chain with a padlock and star-shaped charm. It's been mentioned that he wears these accessories to be more "hip-hop."

Kurokuma has a gangster-like, obscene personality. He swears often and has an impatient, immature nature. He is very immoral and has a rather dark, vulgar sense of humor. Some of his jokes are references and more clever, while others are simply immature or just bizarre.

He is also very brash and disrespectful, even towards people he just met. He isn't above cheap insults or provoking. He appears to enjoy annoying Nagisa Shingetsu the most, most likely because of the boy's strict personality. He makes fun of the Servant by implying that he's homosexual in a mocking fashion and he calls Toko Fukawa "emo chick" and insults her for having glasses. He is also quite perverted and disrespectful towards pretty girls. He has little respect for others, with Monaca Towa being a possible exception. He seems to feel admiration and pride for her evil nature.

He is incredibly noisy and loves to talk, to the point where other characters find him very annoying. At times he speaks extremely fast, too fast to understand him. He claims that talking is his whole purpose in life, and he would die if he stayed silent for too long. Monaca can order Kurokuma to go into "silent mode", which the Warriors of Hope prefer over his constant talking.

Kurokuma is very arrogant, and is the only one who finds himself even remotely funny. He believes he's a very talented rapper and entertainer, which is obviously not the case. His thought process often leads to tangents about his "dream life", such as having legions of fans and being so famous that Jimi Hendrix attends his concerts.

Interestingly, Kurokuma is never seen fighting by himself, which is something he technically should be able to do and even Shirokuma does at one point. When he is left on the open by himself during a boss fight, he just flails around helplessly and keeps talking, like claiming that you shouldn't shoot him because he was just about to donate to charity.

In the end, Kurokuma is revealed to be a half of Junko Enoshima's AI and thus his personality is only an act. Still, it's heavily implied that he has only some of Junko's personality and needs Shirokuma to be whole.

Kurokuma's exact origin is unclear, but he supposedly began to work as the Advisor of the Warriors of Hope after Junko's death. The children do not seem to be aware of his true identity as Junko's AI and have little respect for him.

At first, Kurokuma gave the children ideas how to kill adults and specifically worked together with Monaca, giving her the idea of creating the Second Junko Enoshima. However, as the Warriors developed their own skills and plans, they soon grew tired of the overly talkative bear. Kurokuma was then mostly kept in silent mode and the children talked to him only rarely, with Kotoko even suggesting that they could just get rid of him.

Similar to Shirokuma, Kurokuma has heavily changed his original appearance, to be more unique and "hip-hop".

Kurokuma first appears during an advising meeting with Kotoko Utsugi, Nagisa, and Monaca, discussing their plan to wipe out the resistance. He offers no useful advice, while at the same time irritating all of the characters present.

Kurokuma reappears at the end of the chapter, discussing with Monaca about the plan to create a Second Junko Enoshima and how he's looking forward to the outcome.

Chapter 4 - The Way We Live

When Nagisa returns Servant to the base and attempts to interrogate him, Kurokuma intervenes and attempts to antagonize Nagisa to make him angrier. This is short-lived, however, as an infuriated Nagisa kicks him away. He watches as Monaca throws Nagisa into despair, commenting on how vicious she is.

Kurokuma is with Monaca as Big Bang Monokuma begins its destruction of all the Monokuma units in the city, watching the event on a television. As Servant prepares to leave, he antagonizes him one last time, along with Monaca, with both of them getting ready to start the plan Kurokuma had.

Kurokuma greets Komaru Naegi and Toko Fukawa in the center room of the Warriors of Hope base and gives them clues as to where they can find Monaca. When Monaca enters the room, and he sees she can stand, he was surprised and falls out of his chair.

After revealing that her legs were not disabled as previously thought, Monaca and Kurokuma summoned their battle robot, which appeared to be a combination of the robots used by the other Warriors of Hope. Komaru and Toko were able to defeat them, leading to Kurokuma having his head sent flying off his body, and gets ejected from the building from breaking the window, and falling down to the ground while screaming.

Epilogue - The Changing World We Made

In the epilogue, it is revealed that both Kurokuma and Shirokuma are part of the Alter Ego Junko, pitting the adults and children of Towa City against each other to spread war and despair. Both robots are then destroyed by Izuru Kamukura to salvage their hard-drives for their AI.

Monaca and Kurokuma worked together to create The Successor to Junko Enoshima, which was originally Kurokuma's idea.

Kurokuma at least seems to have a little respect for her, sometimes acting proud of her evil nature. However, Monaca is often annoyed by his talking and sometimes forces him into silent mode.

Monaca does not fully trust Kurokuma, as he doesn't know that she is faking her disability.

Monaca and Kurokuma are also one of the final boss fights with the giant robot they created.

Kurokuma considers Shirokuma to be like a brother, and calls him his "li'l bro".

Despite having no in-game interactions, at the end it appears that both Kurokuma and Shirokuma were partners, both manipulating and concluding that adults and children are both equally stupid.

Together, Kurokuma and Shirokuma form Alter Ego Junko Enoshima and in reality, they're both just a result of her acting.

Kurokuma was Nagisa's advisor. Nagisa respects Kurokuma the least, beating him up the most out of the Warriors of Hope. Kurokuma also teases Nagisa the most and refers to him as "Naggy-sa" ("Shingetsu-boy" in the Japanese version, which is most likely a play on the insult OB or old boy, which is a slang term for retirees).

Kurokuma dislikes the Servant, considering him unimportant in his and Monaca's plans. He also thinks his views on hope are "fucking stupid" and very contradictory.

He enjoys when something bad happens to him, like when he's being punished by the Warriors of Hope. He also mocks him by asking about his supposed homosexuality.

While he has a very calm personality, even the Servant seems a bit annoyed by Kurokuma and sometimes chooses to ignore him.