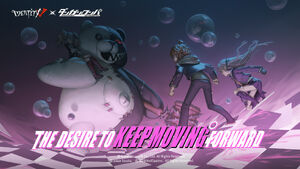 Identity V is an asymmetrical action mobile game for iOS/Android and PC created by Chinese developer Netease. It is available in English, Chinese, and Japanese.

NetEase Games, the creators of Identity V, contacted Spike Chunsoft in 2018 to request a Danganronpa collaboration because Danganronpa has a strong international fanbase - particularly in China where Identity V is developed - and the fanbase of both games has a strong overlap due to their atmosphere. Danganronpa producer Yoshinori Terasawa thought it was a good idea, and eventually agreed to a collaboration that would coincide with Danganronpa: Trigger Happy Havoc's 10th Anniversary. Upon meeting with the NetEase team, Terasawa was impressed that the team were such deep fans of the Danganronpa series, coming to the meeting prepared with a lot of ideas of how the Danganronpa characters could fit into the Identity V scenario, and so they were given full creative freedom. It was felt that because Identity V is popular with junior and senior high school students, the collaboration was also a perfect fit to release alongside the smartphone version of Danganronpa, because smartphones have a different player base than console and PC gamers and both the Identity V and Danganronpa: Anniversary Edition releases would introduce potential new players to both games.[1]

On May 28th it was announced that crossover collaboration goods are planned, but no details have currently been released.[3]

The second collaboration was announced on November 18th, 2020, on Identity V's official Twitter. Twitter: "“Upupupupu——" Familiar laughter comes from our old friend... Bingo! IdentityV x Danganronpa Crossover II is coming! This time, what kind of surprise will Monokuma bring to us? Dear detectives, are you ready for another class trial? (NOV 18, 2020)The four characters from this collaboration were announced from November 19th - 26th, also on the official Twitter.

From May 14th - May 27th, 2020 an online pre-registration campaign was held on the Identity V website to promote the event, with the goal of reaching 5,000,000 pre-registrations before the event began. Every player who pre-registered received an exclusive Monokuma portrait. The 5,000,000 goal was reached by May 25th, and all players were rewarded with 10 free Essences (in-game currency type). 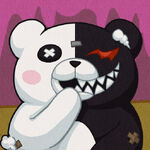 Monocoins were available in the game as a type of in-game limited time currency obtained by exchanging Echoes (premium currency) at a 1:1 ratio or by completing limited time events. Monocoins could be exchanged for Danganronpa Event Essences (used to try your luck at obtaining a Danganronpa skin, graffiti, or portrait) at a rate of 96 Monocoins:1 Danganronpa Essence, or to upgrade the Mono Mono Machine accessory equippable by Guard 26 (Monokuma). Any unused Monocoins at the end of the event turned back into Fragments.

Each crossover character was announced individually over the course of several days, each with a teaser illustration and clue message followed by a the character reveal several hours later.

The Mono Mono Machine is an accessory for Guard 26, intended to be used alongside the Monokuma costume skin. It resembles the slot machine featured in Danganronpa: Trigger Happy Havoc which revealed which character was voted guilty at the end of a Class Trial. The accessory gives the player unique bomb effects which are all references to the Danganronpa series: the stars that appear when Monokuma hits the execution button with his hammer, flames from The Burning of the Versailles Witch, Tetris blocks from Please Insert Coin, and baseballs from The 1,000 Blows.

If the Mono Mono Machine accessory is upgraded to SS-Tier, it unlocks a special skin for Guard 26's Rocket Chair (a prop which is used to eliminate Survivor players from the game) to resemble the rocket used in Jin Kirigiri's execution from the beginning of Danganronpa: Trigger Happy Havoc.

Graffiti are stickers or "sprays" that can be be placed on the map during matches by players. 6 Graffiti were available to unlock from the Danganronpa Event Essences gacha. 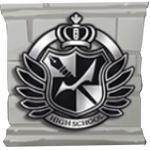 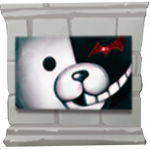 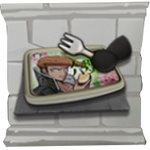 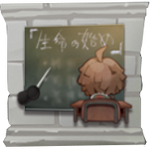 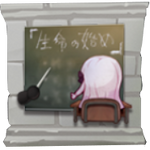 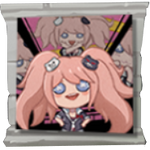 Portraits are pictures used on a player's profile in Identity V. 16 Portraits were available to unlock from the Danganronpa Event Essences gacha. 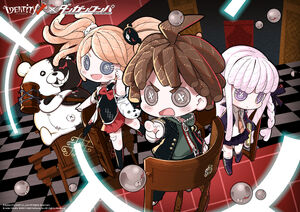 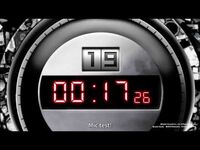 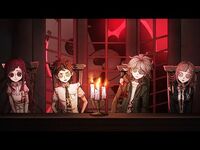