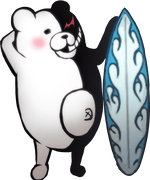 Hidden Monokumas (隠れモノクマを) are a collectible item featured in Danganronpa 2: Goodbye Despair. They are spread throughout Jabberwock Island in every chapter and appear in the overworld as a Monokuma sprite. Collecting half, then all of the 30 of them will reward the player with trophies. They can only be found in their respective chapters.

Note: You are able to see what ones you're missing by looking on the Monokuma Display in Hajime Hinata's cabin.

Unlike previous chapters, this chapter is linear, in that when you leave a room you are unable to return to it. As such, be sure to obtain these Hidden Monokumas in order or you will have to repeat the chapter.

After collecting all of them, Monokuma will show up in Hajime Hinata's cabin to congratulate him, and give him his "prize". Which is just a series of Monokuma poses in his various sprites before he leaves. Hajime, understandably, is upset.