He is a member of the Future Foundation and is the Branch Office 12 Director. His responsibility as the director is assistance in restoring infrastructure, such as roads, communications, public facilities, etc.. He, along with the other Future Foundation Directors, is forced to participate in the Final Killing Game. 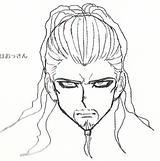 Despite his gentle nature, he gives off a very intimidating vibe, with his large build and the theme of his wrestling persona — he wears the mask of a cow's head, with piercing red eyes and a scowling appearance. Underneath, he has a stern face, brown hair and a goatee. He wears a blue tie and a black suit, with the Future Foundation ID pinned to its lapel.

Despite his intimidating appearance and the origin of his wrestling persona, Gozu is gentle in nature and he has a very quiet, polite way of speaking. When in arguments, he is very patient and rarely raises his voice, and when he does it's a dramatic proclamation of his name, values and what he is willing to do for them. He is shown to be very frightening when angry.

Gozu has high moral standards and sees things like persecution without a fair trial as dishonorable. He also dislikes needless violence and even weapons in general, and readily stops Juzo Sakakura from assaulting Makoto Naegi; he attempts to resolve things quickly, without having to use intimidation tactics but can resort to that if needed, and threatened Juzo with a fight.

Great Gozu respected his comrades greatly and stated that he will never doubt his comrades as long as he lives. After Daisaku Bandai was confirmed deceased, Gozu immediately made a praying gesture by putting his hand on his chest and looking towards the sky as a sign of sorrow and respect.

As the Ultimate Wrestler, Great Gozu was a greatly skilled fighter. As a testament to his strength, he was able to hold his against Juzo the former Ultimate Boxer and Kyosuke who is a skilled swordsman. With his bare hands, he could break a knife with an only small injury that he got and was able to drop a floor using his shoulder. Interestingly, his NG Code is being pinned to the ground for three counts.

Great Gozu's talent as it appears in official translations of Danganronpa material.

Prior to the Tragedy

Great Gozu's past and real name is unclear, but his wrestling persona appears to be based on Gozu. He was scouted to attend Hope's Peak as part of the 69th Class as the Super High School-Level Wrestler. After attending, he graduated 8–9 years before the Tragedy. During that time he worked as a professional wrestler.

At some point after getting recruited by Koichi Kizakura for the Future Foundation, he became the head of the 12th Division. His responsibility as 12th Division leader is to help oversee and assist in the construction of infrastructures such as roadways, communications, and other public facilities. He is also appointed as Kazuo Tengan's bodyguard.

In the opening flashback, Great Gozu is shown on the bridge in a face-off against several members of Ultimate Despair. While Kyosuke Munakata, Juzo, and Sonosuke Izayoi square off against Peko Pekoyama, Akane Owari, and Nekomaru Nidai, Great Gozu stands in a protective position in front of Kazuo.

Great Gozu, along with the other leaders of Future Foundation gather in the boardroom of the hidden off-shore facility to privately discuss what to do about Makoto. The discussion opens and, in response to Ruruka Ando's concern, comments how the Remnants of Despair have really quieted down as of late. Juzo fires back at him, mockingly asking if 40 terrorist attacks in a single month are 'quieting down.' The two continue back and forth, ending with Great Gozu saying that the solution was not as simple as Juzo seemed to think it was. Great Gozu turns his attention to the group as Daisaku Bandai, Seiko Kimura, and Ruruka veer away from the original topic, attempting to get them to quiet down. Kyosuke entered the room soon after and, after watching him step onto the table to look down on Kazuo, commanded him to show respect.

After Makoto, Aoi Asahina, and Kyoko Kirigiri entered the room, at Kyosuke's request Juzo apprehended Makoto. Great Gozu is angered seeing the abusive way that Juzo is treating Makoto, and politely asks him to stop. He reasons that punishment without a fair trial was dishonorable and goes on say that, if he didn't stop, Great Gozu would challenge him to a fight.

During the boardroom's attack, Great Gozu attempts to reassure everyone. He tries to rationalize that, with all of the Future Foundation leaders here, there was nothing they couldn't handle, but is quickly overcome with the sleeping gas hits the boardroom.

Gozu is one of the first to speak after Monokuma's broadcast ends, wondering aloud who is doing this to them. Together, Juzo and Great Gozu go to inspect Chisa Yukizome's body and, out of respect, Great Gozu takes off his jacket and lays it on the corpse. After Juzo's actions indirectly kill Daisaku, Great Gozu asks in exasperation what he had done.

When Kyosuke orders everyone in the room to point at the person they believe is the traitor, Great Gozu refuses to raise his hand. He blocks Juzo's knife with his fist and breaks the blade in half, attempting to calm the situation. He doesn't believe Makoto's death will solve anything, and create nothing but more despair. Kyosuke readies his sword and is aiming to challenge him when the room is filled with fumes. In the confusion, he allows Hina and Makoto to escape by shoving Juzo back and then facing off against Kyosuke.

Kyosuke pushes Great Gozu back out into the halls and Great Gozu, using a sledgehammer, tries to break through his defense. He swings the hammer wildly and shouts that the death of a comrade will only cause more despair. He swears that he will never kill his allies, even if it cost him his own life, and continues to try and push Kyosuke back. Hina throws a broken fire extinguisher, distracting Kyosuke and allowing Great Gozu to blow him back while his guard is down. Great Gozu drops the hammer and leaps up, elbow dropping the floor and creating a distraction of dust and debris. He slings Makoto over his shoulder and they outrun Kyosuke into the next room.

Together with Miaya Gekkogahara, Hina, and Makoto, they decide to get into a separate room and barricade themselves so they will be protected once they are put to sleep. Great Gozu places a broken locker against the door of the room and listens to Makoto's uplifting speech to Hina. He laughs and compliments him on his ability to stay optimistic. He reveals that Kazuo was happy when Makoto first joined Future Foundation, saying that things were most certainly going to change, and passionately encourages him to cheer up. As the time approaches 00:00, Great Gozu puts a hand over his heart in prayer.

At the beginning of the episode when Makoto, Hina, and Miaya look around after waking up, they were shocked to find Gozu hanging on the top of the wall dead with a knife stabbed into his heart. After his body is taken down, Hina puts her jacket on Gozu's dead body in respect.

Later in the intercom room, Makoto announced that the third victim of the Final Killing Game was Great Gozu.

Kyoko examined Great Gozu's body, removed his bull mask, and cover his face with a handkerchief as she examined the body.

Great Gozu appears in a flashback where he and the other Future Foundation members observed the opening of Hope's Peak Academy's gate after Junko Enoshima's demise.

Later, it was revealed that Gozu has been manipulated by Monokuma using the brainwashing anime that shown on the monitor. Gozu, who was the closest person to a monitor at the moment awoke from his sleep and forced to watch the brainwashing video via the monitor. The video could brainwash Gozu who later torture himself until his death using a knife dropped out of the monitor.

Although not shown in the main story, it was revealed that Daisaku and Great Gozu were good friends during the Tragedy as Future Foundation members. Great Gozu helped Daisaku in farming various vegetables all around the Future Foundation building using their talents in a fun way. Great Gozu even blamed on Juzo for violating Daisuke's NG code.

Acting as his bodyguard, Great Gozu seems to respect Kazuo's authority over Kyosuke's and would prefer to take orders from him.

Great Gozu admires Makoto for his optimism in the face of adversity and has thought that way ever since seeing him broadcast in the Killing School Life for the first time. He sees Makoto as the type of hope that Future Foundation needs, and fiercely protected Makoto from Kyosuke for that reason.