Dorm rooms are the personal living quarters where each student sleeps inside Hope's Peak Academy. Most of these rooms are decorated to suit the tastes of the individual who lives there. They are all located in in a corridor on the first floor of Hope's Peak Academy, known as "Hotel Despair". Each individual's dorm room has a red door with a sign on it, featuring a pixelated likeness of the resident and their name.

The dorm rooms each have one room that serves as both a sitting room and bedroom, and a private ensuite bathroom. Each room includes a memo pad, a potted plant, and some basic wooden furniture, including a bed, desk, a chair, a round table, and a shelving unit. Like most rooms in Hope's Peak Academy, they are monitored by security cameras, and have a monitor mounted on the wall from which Monokuma gives wake-up calls, night-time alerts, and other school announcements. The default design of the room features colour-coded bedding based on the gender of the occupant - pink for girls and blue for boys. Girls' rooms come equipped with a sewing kit in the desk drawer, whereas boys' rooms include a tool kit. Girls' rooms also feature a locking bathroom door, which the boys' rooms do not. The water supply to all of the bathrooms is cut off after 10pm.

The dorm rooms are extremely secure, with a lock which cannot be picked and a sophisticated key which is hard to replicate. They are soundproofed, so no sound from inside the room can be heard in the corridor or adjacent rooms. Each room has its own doorbell. 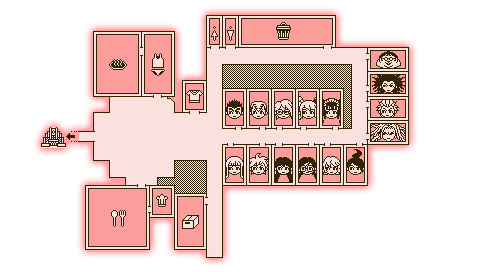 In chapter 1, Sayaka Maizono is found dead in Makoto's dorm room. The previous night, Sayaka had switched rooms with Makoto, claiming that she felt unsafe sleeping in her own room. Sayaka invited Leon Kuwata to the room and attacked him with a knife from the kitchen, but Leon defended himself with the golden ornamental sword, leaving slice marks all over the walls and floor of Makoto's room. Leon broke his way into Makoto's bathroom door, disarmed Sayaka, and murdered her with the knife. Sayaka wrote the word "LEON" upside down on the bathroom wall as she died. The crime scene was entirely cleaned up after the class trial, with no evidence the event ever occurred, but in the proceeding chapters whenever the player selects the bathroom door for Makoto to observe, he expresses discomfort and mourns Sayaka.

In Chapter 5, Byakuya confiscates the key to Kyoko's room after he suspects her to be the mastermind. After Mukuro Ikusaba's body is found and Kyoko has gone missing, Makoto and Byakuya enter Kyoko's room to look for clues for where she might have gone. They discover a wood block key on her table, which opens a locker in the dojo containing titanium arrows. They also find Mukuro's school profile hidden under the bedsheets, as per instructions that Kyoko gave Makoto incase anything happened to her.

This room likely belonged to "Junko", who was really Mukuro Ikusaba disguised as Junko Enoshima. The interior of her room is never seen, although it is profiled in the "Headmaster Monokuma's Roomcheck" section of the Danganronpa: Trigger Happy Havoc artbook. If the real Junko has her own dorm room elsewhere in the school building (there are only fifteen dorm rooms on the first floor), it is also never seen.

Translation below by @ProdigalDaughterAlice on Tumblr:

Retrieved from "https://danganronpa.fandom.com/wiki/Dorm_Rooms?oldid=339635"
Community content is available under CC-BY-SA unless otherwise noted.