Danganronpa in Namjatown 2016-17 (ダンガンロンパ in ナンジャタウン 2016-17) was a collaborative event held in Japan Namco's Namjatown arcade chain. The event was held to promote the then-upcoming Danganronpa 3: The End of Hope's Peak High School and Danganronpa V3: Killing Harmony and included a themed cafe menu, themed minigames and exclusive merchandise based on around both.

The event originally ran from December 2nd, 2016 until February 16th, 2017 at Namjatown's flagship location in the Ikebukuro district the of Toshima ward in Tokyo, Japan, before scaling down and moving to the Namjatown satellite stores over the following months.

The following food items were only available from January 13th, 2017 onward.

Chisa-sensei's Extracurricular Lesson ~ Doki Doki ☆ After School ~ (「ちさ先生の課外授業～ドッキドキ☆After School～」, `Chisa sensei no kagai jugyō ~ dokkidoki ☆ After School ~) was a digital roulette game available to play during the event's duration, in which players could win a number of physical prizes featuring Danganronpa 3 characters. It cost ¥400 per play.

In the game, Chisa is worried her students are slacking off with their practical exams coming up. The player can pick any of the Class 77-B students to play as. There is no gameplay involved, instead after the player chooses their character, the game randomizes the result[1]. The prizes were as follows: 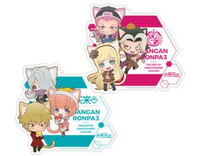 The Monomono Garapon V3 (モノモノガラポンV3) was a second roulette game available to play during the event from January 13th, 2017 onwards, in which players could win a number of physical prizes featuring Danganronpa 3 characters. It cost ¥400 per play. The prizes were as follows:

Below is a set of Danganronpa 3 themed merchandise available and buyable during the period of the Cafe's introduction and end that a customer could receive through a purchase while at the Café.

The following merchandise items were only available from January 13th, 2017 onward.