Danganronpa in Other Media 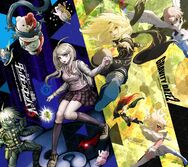 Attack on Titan 2: Future Coordinates (進撃の巨人2 ～未来の座標～) is a 3DS adaptation of the anime Attack on Titan published by Spike Chunsoft. In the game, Monokuma features in a cameo as a Titan, which is the primary antagonist of the Attack on Titan series which is a type of giant. Monokuma also appears as an unlockable costume for your character to wear.

Crypt of the Necrodancer

Main article: Crypt of the Necrodancer

Crypt of the Necrodancer is an rhythm-action roguelike game. The Japanese release of the game included an official collaboration with Danganronpa, featuring eight Danganronpa skins and a remixed optional soundtrack by Masafumi Takada. The collaboration was later released worldwide as a free patch for PC.

Conception II: Children of the Seven Stars (CONCEPTION II 七星の導きとマズルの悪夢) is a Japanese turn-based RPG by Spike Chunsoft and Atlus for the Nintendo 3DS, PS Vita, and PC. The DLC Monokuma Strikes and Monokuma's Revenge can be accessed for free from the in-game store, allowing the player to battle against Monokuma. The model used for Monokuma is the same 3D model used in the Magical Girl Miracle ★ Monomi minigame from Danganronpa 2: Goodbye Despair.

Exist Archive: The Another Side of the Sky

Exist Archive: The Another Side of the Sky (イグジストアーカイヴ) is a side-scrolling RPG developed and published by Spike Chunsoft for the PS Vita and PS4. A DLC costume of a Monokuma mascot suit is available to purchase from the game's store. It is equippable by the game's protagonist Kujo Kanata.

GachiTora! Abarenbou Kyoushi in High School (ガチトラ！ ～暴れん坊教師
in High School～) is an action game developed by Spike for PSP. The player has the option to dress the protagonist, Torao Kaji, in alternate outfits. If a Danganronpa save file is present on the same PSP as GachiTora!, the player can dress Torao in a Monokuma mascot suit.

Kenka Banchō Bros. Tokyo Battle Royale (喧嘩番長Bros. トーキョーバトルロイヤル) is an action-adventure game by Spike Chunsoft. The protagonists are two delinquents who are aiming to be the top fighters in Tokyo. The game features a cameo appearance by Mondo and Daiya Owada, who challenge the protagonists to a fight. After defeating them, the player can then summon the Owadas to fight alongside them.

Maid Paradise Mezase! Maid Number One! (メイド☆ぱらだいす ～目指せ！メイドナンバーワン！～) is a game about three maids who work at a maid cafe and was developed by Spike Chunsoft for the PlayStation Portable. In the game, you complete various minigames to continue the story. In one of the minigames, Monokuma makes an appearance as a doll that one of the maids can hold.

Samurai & Dragons (サムライ＆ドラゴンズ) is an free to play action game from 2012 for the PlayStation Vita which was developed by Sega. In 2012, a Japan-exclusive Danganronpa event was held between July 25th and August 8th which allowed players to get a Monomi and two Monokuma cards for checking in everyday to get a stamp on the campaign card.[1]

PixelJunk Monsters 2 is a tower defence game for PS4/PC developed by Q-Games and published by Spike Chunsoft outside of Japan. The DLC features a Danganronpa themed DLC pack featuring masks of Monokuma, Monomi, and the Monokuma Kubs and a new level called "Kibogamine" (named for Kibōgamine Gakuen, the Japanese name for Hope's Peak Academy).

Motto! SoniComi (モット！ ソニコミ) is a Japanese PS3 visual novel. In the game, players aim to become a professional cameraman, and take requests from various clients while deepening a friendship with the gravure idol Sonico, the mascot of software company Nitroplus. Danganronpa themed outfits are available from the in-game store: A Monokuma hoodie, a Monomi hoodie, and a pair of Monokuma and Monomi handpuppets.

Mystery Chronicle: One Way Heroics (不思議のクロニクル 振リ返リマセン勝ツマデハ) is a role-playing video game developed by Spike Chunsoft for the PS4, PS Vita, and PC. One Way Heroics is a turn-based role-playing game in which players explore randomly generated dungeons. Makoto, Komaru, and Monokuma are playable characters after downloading the Ultimate Student DLC. They each use long range Truth Bullets as their primary attack.

Terraria is a 2D action-adventure sandbox video game developed by Re-Logic. Exclusively in the Japanese edition of the game, published by Spike Chunsoft, the player can unlock Monokuma and Monomi costumes for their character.

Weekly Toro Station (週刊トロ・ステーション) was a Japan-exclusive news service video game for PS3 and PSP by Sony Computer Entertainment. It featured the Sony mascots, Toro and Kuro, and was updated weekly with video game and anime related news in a visual novel style. The service also featured a number of minigames. The 143rd episode was about Danganronpa 2: Goodbye Despair, and featured Toro and Kuro with Monokuma and Monomi designs explaining the mechanics of the game and other information.

Atgames.jp is a Japanese social avatar-based browser game where players collect and trade virtual items with which to dress up their avatars and play games. On February 22, 2013, Atgames launched a set of official dress-up items based on characters from Danganronpa 2: Goodbye Despair.

Divine Gate, a Japanese collectable card puzzle battle RPG by the creators of Puzzle & Dragons, has hosted three waves of Danganronpa 1.2 Reload collaboration events since 2015. 16 characters from Danganronpa: Trigger Happy Havoc and Danganronpa 2: Goodbye Despair have appeared as collectable cards in the game in special events.

A Danganronpa 3: The End of Hope's Peak High School collaboration event was held in the Chinese and Japanese releases of the iOS/Android game Hōkai Gakuen 2 (崩坏学园2 Houkai School 2, known as Guns Girl Z in English). The game featured 8 members of the Danganronpa 3 cast, including their Japanese voice actors and many unlockable Danganronpa 3 themed items.

A Danganronpa 3: The End of Hope's Peak High School collaboration event was held in the Japanese iOS/Android game Sengoku Asuka ZERO. The game featured female characters from the anime as collectable warrior cards that could be used in the game.

A Danganronpa: Trigger Happy Havoc collaboration event was held in the Japanes iOS/Android/web browser tower defence game Shiro Project:RE. The game featured female characters from the game as collectible fighters that could be used in the game.

The DanganGravity Live Broadcast (ダンガンGRAVITY生放送) was a joint livestream held by PlayStation Japan, streamed live online on Niconico, YouTube, and Fresh! on December 25, 2016. The event involved a cross-collaborational playthrough of the demos of both Danganronpa V3: Killing Harmony and Gravity Rush 2, with each development team playing the others' game. The event also featured a special mix of Danganronpa songs created by Masafumi Takada.

In the 10th episode of the second season of the CG anime Wooser's Hand-to-Mouth Life - Fate ~The Strongest Enemy Appears; A Cruel, Inescapable Destiny; Wooser is Judged~ (因果 ～現れた最強の敵、抗えぬ過酷な運命、裁かれるうーさー～) Wooser was shown imitating Monokuma before the episode begins, with Monokuma also making a cameo appearance. Later, after the episode ended, Wooser and his friends were shown in a Class Trial, and Monokuma decides to execute Wooser. There is also a special illustration drawn by Danganronpa series artist Rui Komatsuzaki.

A special manga was created as a collaboration for Hangame and Danganronpa 3.

As a promotion for the Blu-Ray and DVD release of Danganronpa: The Animation, promotional posters and a TV commercial crossing over Danganronpa and the 2012 American movie Ted were released in Japan. The promotion featured Monokuma and the titular character Ted, who is also a bear.