It was released on Steam for PC by Spike Chunsoft on August 26th, 2017 with dual English and Japanese audio and English, French, Japanese, Simplified and Traditional Chinese language options[12].

The demo is approximately between 1hr30-2hrs long, and allows players to play as Kaede Akamatsu for the first time, briefly meet the new cast of characters, experiment with the new gameplay mechanics (such as being able to "smack around" objects while investigating), explore a small section of the school, and try out the new Class Trial minigames. Because the story is unique to the demo, it does not spoil any of the plot of the main story, instead heavily referencing the previous, Japan-exclusive demo of Danganronpa: Trigger Happy Havoc, known as Dangan Ronpa: Kibō no Gakuen to Zetsubō no Kōkōsei (Trial Version), and featuring the murder case of Yasuhiro Hagakure who does not appear in the storyline of the full game.

Completing the Demo, and transferring the save data to the full game, will reward the player with 333 Monocoins, the Class Trial skill "Machine Gun" ("Point Blank" on PS Vita) and the present "Nail Brush", which unlocks a cutscene during Chapter 1 of the full game, before it can be gotten from the MonoMono Machine.

The Demo - known in Japan as New Danganronpa V3 Trial Version - was first announced on Spike Chunsoft's New Danganronpa V3 development Ameblo blog on December 1st, 2016[13]. The Demo is only the 2nd Demo ever released for the Danganronpa franchise, since the release of the Japan-exclusive Demo Dangan Ronpa: Kibō no Gakuen to Zetsubō no Kōkōsei (Trial Version) 6 years prior. The Demo was promoted in the December 15, 2016 issue of Famitsu magazine, where it was revealed that the Demo would feature an original story exclusive to the Demo, and that Makoto Naegi, Hajime Hinata, and Yasuhiro Hagakure would appear as guest characters[14]. New Danganronpa V3 Trial Version was released on the Japanese PlayStation store on December 20th, 2016 for PlayStation Vita and PlayStation 4[15].

The Japanese version of the Demo debuted on Steam for PC on August 25th, 2017.

Danganronpa V3: Killing Harmony Demo Version is the first Danganronpa Demo to be released outside of Japan. It premiered on the showfloor of E3 2017 from June 13th to June 15th, 2017[18], with both English and Japanese voice tracks playable for attendees. During the event, a 16 minute commentated preview of the Demo was streamed by PlayStation Underground as part of their E3 coverage, which was the first official footage of English localization[19]. The Demo was then available to play for attendees of Anime Expo 2017 from July 1st to July 4th, 2017, and later at a press event hosted by NIS America and Kazutaka Kodaka held in London on July 10th, 2017. 30 minutes of gameplay footage from the London press event was shared by Gamereactor on Jul 13th, 2017[20], followed by an exclusive video preview of the full Demo by IGN on July 31st, 2017[21].

After a promotional Danganronpa event at the PS Carnival in Taipei, Taiwan, the Demo was released with English and Japanese audio and Chinese and Japanese subtitles in several Chinese-language PlayStation Stores on August 19th, 2017[1]. The Demo was later released worldwide on August 25th, 2017[3]. The Demo was available on both PS4 and PS Vita in North America, Canada, and Mexico on release day. In Europe and Australia, the PS4 Demo was available in all territories on release day, however the PS Vita Demo was only available in Germany, where both the PS4 and PS Vita Demos were PS Plus subscriber exclusive due to age restrictions in the country[22]. The Demo was later released on PS Vita in Europe and Australia on August 29th, 2017[11].

The Demo was not released in South Korea due to Danganronpa V3 being banned in the country[23].

Reminiscent of the prologue of Danganronpa: Trigger Happy Havoc, Kaede Akamatsu woke up on her desk, unable to recognize her surroundings and not knowing how she got there. Makoto Naegi, seeing she had woken up, introduced himself as Kaede's upperclassman, and Ultimate Lucky Student. Makoto already knew Kaede was the Ultimate Pianist, because, as in the Danganronpa: Trigger Happy Havoc, he had researched the students' talents before coming to the school. Makoto encouraged Kaede to read the note sitting on her desk. It read:

"If you want to progress the story... come to the gym. But please be careful. There are other people wandering around. If you talk to them, you'll end up having to listen to their introductions. Deja vu! I've just been in this place before! Er, sorry, there's no time for that right now... Anyway, come to the gym. Seriously, please."

Kaede then left the classroom with Makoto, introduced herself to each of the students, including previous protagonist Hajime Hinata, who introduced himself as also being her upperclassman. She then headed for the gym. Once there, Makoto told Kaede that he could not go with her beyond that point, because she's the protagonist now, and that they will meet up later. Before leaving, he told her that although she might feel despair, he didn't want her to throw away hope, and that even if there is despair on the horizon, he and Hajime are there to help.

Kaede entered the gym, and met Monokuma for the first time. He introduced himself as the academy's headmaster, and explained to her that she and the rest of the students were going to spend the rest of their lives within the walls of the school unless they killed one another. He told her that he has prepared a dormitory for each of the students, and that she should go there next.

Kaede learned that she would be sharing the room with the other "protagonists", Makoto and Hajime. After entering their room, however, she found it trashed, with upturned furniture and knife slashes on the walls and bed. She entered the bathroom, and there she found Yasuhiro Hagakure's corpse with a knife in his abdomen. Monokuma appeared and explained that it was now her and her classmates' job to investigate the crime scene and find evidence for the upcoming Class Trial.

After investigating and collecting evidence, and meeting the Monokubs, Kaede headed to the courtoom. K1-B0 and Rantaro Amami agreed to not participate in the Class Trial due to there not being enough podiums, on the condition that they would still be allowed to vote on who they believed the blackened was. Monokuma agreed to his terms, because "Even with these speedbumps in the road, the destination won't change. The outcome of this trial is absolute."

The Class Trial began, and all evidence appeared to point to Makoto, however, Monokuma interrupted the trial, saying: "That's it! I won't let you go any further! Cuz this is just the demo version!".

Just as it seems the Demo is over, however, more text boxes appear over the black screen, with Makoto and Hajime asking Monokuma how their acting was. Makoto, Hajime and Monokuma all say goodbye, but not before Yasuhiro shouts "Heeey! Wait for meee!", implying he never really died, and that the whole case was just for show.

For a walkthrough of the Danganronpa V3 Demo Class Trial, see: Class Trial 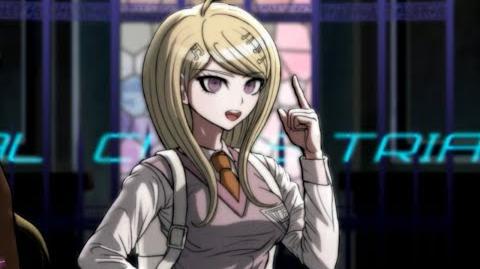 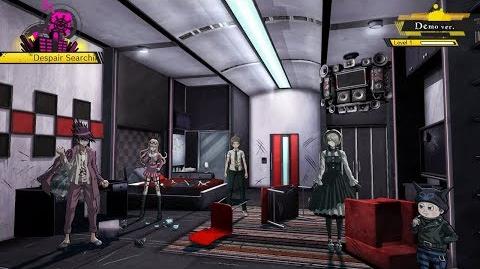 References to Other Media