In a crowded street littered with corpses and an overturned bus, Ted Chikatilo forced a bomb into the mouth of a man and then threw him into the air. The bomb exploded inside him in mid air, and Ted rolled onto his back on the floor to watch the "firework". He laughed as the man's blood rained down on him, and said "he's next".

Meanwhile, Eiichirō Saiyama, a 32 year old manga artist, was struggling to write his latest page. In the past, Eiichirō had written a documentary manga about The Tragedy which was quite succesful, but didn't get any praise for it. In a flashback, he reflected that he began writing manga as a child after receiving praise from a girl in his class, but that that was the only compliment he ever received in his entire life.

Eiichirō's doorbell rang and a delivery man left him a package he was not expecting. When he opened the box, Takumi Hijirihara was inside of it. Takumi told Eiichirō that he always read and enjoyed his manga, then went into Eiichirō's apartment. Takumi explained that he admired how Eiichirō's drew The Tragedy with such fine detail and realism, however, the only thing "too real" about his manga was the corpse depictions. Eiichirō tried to deny it, but Takumi walked to a door in the back of the room, revealing a large number of corpses in a variety of poses.

Takumi deduced that Eiichirō was not killing out of passion, but just so that he had references for his drawings, using them to replicate the historical killings as models. Eiichirō snapped that someone like Takumi can't relate to his struggle of seeing the thing he spent weeks drawing being disregarded by editors and readers without any thought to his feelings. He has been murdering people so that his drawings can become more realistic, in the hope of finally receiving the praise he desperately desires.

Eiichirō attacked Takumi, holding three giant metal pens between his fingers like Wolverine's claws. Takumi dodged, and then performed his own "copycat murder", impaling Eiichirō with his own giant pens in the manner of Mukuro Ikusaba's execution.

We then hear the story of The Tragedy:

"The Biggest, Most Awful, Most Tragic Event in Human History. Multiple simultaneous incidents that occurred all over the world. War. This name is a general term for all that. Thanks to this incident, humanity as a whole was ready to accept it's total destruction. The one who saved the world from this tragedy were Hope's Peak Academy's students. They were brave boys and girls with talents referred to as "Super High School Level". Thanks to their success, The Tragedy's mastermind, Junko Enoshima, was erased from this world. However, it's not like the world has completely escaped from her influence.

Her sympathizers, the Remnants of Despair, keep acting even now to carry her will. Countless crimes, in all forms possible, were brough forth by The Tragedy, making this situation far from ending. Therefore, an organization was established in order to oppose Junko Enoshima. The Future Foundation. Day and night, the two opposing sides are chasing after each other."

After leaving Eiichirō's apartment, Takumi received a phone-call on his cellphone from an Ted Chikatilo, calling from an unlisted number. He gave Takumi an ultimatum that if he wanted to see Misaki Asano and Mekuru Katsuragi alive again, he had to come to Tify Ariake Arena. Ted put the phone down and then threw a body into the van where he was storing Misaki and Mekuru, both bound with ropes. The body appeared to be that of Makoto Naegi. 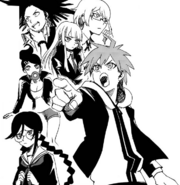 The Remnants of Despair

The tankōbon Volume 1 release included 4 bonus pages at the end of chapter 3: 2 character profiles of Misaki and Takumi, a page with a short blurb from scenario writers Kazutaka Kodaka and Yōichirō Koizumi, and a short blurb and 4koma by Mitomo Sasako.

"How did you like Danganronpa Gaiden: Killer Killer's first volume? And what about this little experiment of only revealing this was a Danganronpa spin-off in the third chapter? Please think of everything until that point as a really long avant-title (that prologue-like thing they show before the opening theme).

Why did I decide to go for this experiment? There were many, many reasons for that. So many that I actually forgot all of them. Well, to put it simply, it would be "because it seemed fun". I guess?

This piece is directly linked to the Danganronpa 3: The End of Hope's Peak High School anime, so please watch that work as well. Look forward to Volume 2 too. Hijirihara and Asano are so cute!!"

"I met Danganronpa in 2011. It's already been 5 years since then. I remember quite well that upon hearing all the comments of how great of a game Danganronpa was, I bought a PSP just to play it, and played it fervently. 5 years later, to be able to participate like this in a work I met as a fan fills me with joy.

This work is tagged as a spin-off, but just having Danganronpa fans (and people who met Danganronpa though this) enjoying it is already enough to make me happy.

This is the story of Takumi Hijirihara and Misaki Asano, who are assigned to the Future Foundation's 6th Branch's Special Crime Unit. Thanks for reading."