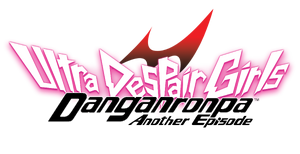 At the NIS America’s February 19 press event, it was confirmed that the game would be published in the West. The localized game was released in North America on September 1, 2015, in Europe on September 4, 2015, and in Australia on September 10, 2015. The Western release includes both Japanese and English audio.

"Komaru Naegi is a normal girl, the kind you can find anywhere. She was taken from her family and imprisoned in an apartment during The Tragedy. Even after a year and a half, she had not managed to escape. Komaru has almost completely abandoned hope and has grown to accept her imprisoned life. But one morning, she was forced to learn even deeper despair when someone suddenly broke down her front door. But it wasn't a hero or a savior...

After escaping from the merciless Monokuma, Komaru is stunned to see the outside world, a world she hadn't seen in one and a half years. It had become a world of despair, where children controlling Monokumas ruthlessly hunt down adults. Her only hope of survival is the Hacking Gun, given to her by a mysterious stranger, a girl by the name of Toko Fukawa." - Official NIS synopsis [5]

"Komaru Naegi, Makoto Naegi’s little sister, has been imprisoned inside a mysterious apartment for over a year. One day, she is rescued by Byakuya Togami of Future Foundation, but the rescue is derailed by a sudden onslaught of hundreds of Monokumas. Komaru soon discovers that the city has been taken over by a group of children calling themselves the Warriors of Hope. Their leader, Monaca, declares that the city will be the site of a “children's paradise,” and to accomplish this, all the adults will be exterminated. Komaru teams up with Toko Fukawa to try to survive the rampaging Monokumas, escape the crafty Monokuma Kids, and uncover the secrets of the city." - Official Steam synopsis [6]

Danganronpa Another Episode is a third-person adventure shooter game where the player controls Komaru Naegi as she tries to survive in a city overrun by Monokuma Units with the help of her partner, Toko Fukawa.

During the game, the player has the option to switch between playing as Komaru and Toko's split personality, Genocide Jack. Choosing to play as Komaru allows the player to utilize a megaphone-shaped hacking gun which turns her words into various types of ammunition, called Truth Bullets. Initially, the hacking gun has an unlimited stock of every type of Truth Bullet. Later on, The Servant messes with the gun when she is taken hostage onto the Warriors of Hope's airship, therefore forcing her to rediscover the different bullets and use them in limited supply.

Using the hacking gun, Komaru can issue several different commands based on the Truth Bullet she shoots:

Genocide Jack's normal attacks include a basic melee combo, whose length can be upgraded by buying upgrades from shops, and through a charge attack. The charge attack functions differently and does more damage the longer it's charged. A short charge results in Genocide Jack throwing scissors in all directions and is effective at close range. A medium charge results in Genocide Jack flipping upside down and flying forward while spinning like a top while slashing, cutting a wide swath through enemies. At full charge, Genocide Jack flies forwards while spinning like a drill, punching through any enemy in her path. Being attacked will cancel any charge. Upgrades also exist for both charge attack damage and charge speed.

In addition to her normal attacks, Genocide Jack can also use special moves using Slash Lust. The Slash Lust gauge is indicated by a row of scissor symbols at the bottom of the screen while Genocide Jack is active. Slash Lust charges by using normal and charge attacks to kill Monokumas, and both the charge rate and the maximum capacity are upgradeable. When using Slash Lust, the player must first lock onto a target. Two types of Slash Lust attacks are available. The first uses only a single unit of Slash Lust and targets a single enemy. The second uses three units and can target up to five enemies. Once activated, Genocide Jack jumps off-screen, and then an automated sequence is shown in which she attacks the targeted enemy.

Danganronpa Another Episode also features a different system for collecting Monocoins. In this game, Monocoins are collected by defeating enemy Monokuma Units. Depending on how the Monokuma Unit was defeated, the Monokuma will drop gold, silver, or bronze Monocoins. These Monocoins can be used to purchase upgrades for Komaru's Megaphone Hacking Gun and Genocide Jack's scissors at the Monokuma Kid shop. Monokuma Units can also drop other items when defeated such as Truth Bullets, batteries, and extra lives.

The player will also encounter various Monokuma Kids who will challenge Komaru and Toko to various puzzle-like mini games which the player must complete to access new areas. These challenges range from destroying Monokuma Units, finding Monokuma Kids without being caught, to solving various riddles throughout the game.

Compared to Danganronpa 2: Goodbye Despair, Danganronpa Another Episode features a lot more collectibles in the game, which can be found by exploring Towa City or by using the Detect Truth Bullet on the Megaphone Hacking Gun. These various collectibles include Hit List Cards, Socki the Sock, Books, Reference Books, Hidden Kids, and Notes.

Unlike the two previous entries in the Danganronpa series being visual novel adventure games, Danganronpa Another Episode: Ultra Despair Girls is a third-person spin-off game. Initially, the game was a project from members of Spike Chunsoft that wanted to develop a more action-oriented spin-off game. One of the proponents for a spin-off game was Kazutaka Kodaka, who always has wanted to write a story of two characters running away from despair, and he felt that the easiest way to do this was through an action game that necessitated movement with Danganronpa characters. When Spike Chunsoft green-lit the proposal, they let Kodaka have free rein to write the narrative for Danganronpa Another Episode: Ultra Despair Girls. Kodaka stated that he spent an equal amount of time writing the dialogue and backstories for each of the characters of the game in comparison to the previous games. One aspect of Danganronpa Another Episode: Ultra Despair Girls that the development team was worried about was whether the shift in gameplay genres would alienate players who were not good at action games. They decided to add the mechanic of switching between characters and the ability for Toko to switch to Genocide Jack to make it easier for players.

Danganronpa Another Episode: Ultra Despair Girls was announced at a Sony Computer Entertainment press conference in September 2013, where the first game play trailer was shown; the trailer also teased the third entry in the series, Danganronpa V3: Killing Harmony. When the game launched, Spike Chunsoft promoted the game and offered several pre-order bonuses, including digital wallpapers, mousepads, and a smartphone stand. Additional merchandise such as Monokuma stuffed toys and an armband were also offered at Comiket.

According to Kodaka in an interview, the game's original concept was "an action game, and then within that, two girls together, in an incredibly hopeless situation, and how they come together to overcome what they're experiencing, what they're facing."[7]

According to Masafumi, a VR game of Danganronpa Another Episode: Ultra Despair Girls wasn't going to be developed because other companies were already working on other virtual reality shooting games, as well as because the developers wanted to create something that only they could make. Terasawa decided to make the punishment sequence play out from a first-person perspective to make the player feel horror, but also include Monokuma to lighten the mood, leading to the creation of Cyber Danganronpa VR The Class Trial.[8]

The character designs are one of the most notable changes in the final game, and a lot of them had a very different appearance prior to it.

Komaru's designs highly changed during the development of the game. There were three early sketches of Komaru's sprites; these were placeholders for the "motivation" mini game.

The original Monokuma Unit also featured some differences — they were more intelligent and also carried knives, as seen in the game's trailer.

In the first trailer for Danganronpa Another Episode: Ultra Despair Girls, there was a version of Monokuma that held 2 knives; however, this wasn't shown in the final game because it was scrapped at some point during the game's development for an undisclosed reason.

On September 25, 2014, Danganronpa Another Episode was licensed and published by Spike Chunsoft in Japan for PlayStation Vita. The game received a rating of D from CERO. The game received both a standard and limited edition release. The limited-edition included a physical copy of the game, a Danganronpa Another Episode bag, a Monokuma mug, two-character clear files, and an official art poster. The game was later re-released for the PS4 on June 29, 2017.

In September 2015, the game was licensed and published by NIS America for PlayStation Vita in North America and Europe. The game received a rating of M by ESRB and 16 by PEGI. The game received both a limited edition and a single disc release. The limited-edition included a copy of the game, a 30-page art book, a fifteen track soundtrack single disc, and a collectors' box. In November 2016, NIS America announced a port for PlayStation 4, with both the limited edition and the single-disc version.

On December 3, 2015, the game was licensed and published by Intragames in South Korea for PlayStation Vita. The game received a rating of 18 by GRAC. The limited-edition release included a copy of the game, a special art book, a keychain, a special book featuring Danganronpa: Trigger Happy Havoc characters, and a steel cartridge case.[12]

The game was published by Spike Chunsoft in July 2015 for PlayStation Vita. The game received a rating of 18 by GSRR.

The Steam port was released worldwide on June 27, 2017. The game featured English and Japanese dual audio, as well as English, Japanese, Traditional Chinese, and Korean subtitles.

Danganronpa Another Episode received generally positive reviews. Famitsu awarded the game a score of 35/40[13], while the English localization received scores of 72 and 67 for the PS Vita and PS4 versions respectively[14][15].

Masafumi Takada returned to compose the soundtrack for Danganronpa Another Episode, while Megumi Ogata and Aya Uchida, the voice actresses of Makoto and Komaru Naegi, performed the ending credits Progressive -Zan Shin-.

Danganronpa Another Episode also had a mobile app featuring Komaru that was released for Android in Japan in August 2015. The app allows users to manage their smartphone files and cache, and Komaru's expression changed depending on the amount of storage used.[18]

Danganronpa Another Episode also appeared as a DLC in Chain Chronicle with Komaru, Toko, Genocide Jack, Makoto, The Servant, Byakuya, and Monokuma appearing as limited guest characters and playable characters.