View source
watch 02:40
World of Warcraft: Dragonflight - The Loop
Do you like this video?
Play Sound

Hōkai Gakuen 2 (崩坏学园2 Houkai Gakuen 2 / Houkai School 2), known as Guns Girl Z in the English release, is a Chinese side-scrolling shooter mobile game developed by miHoYo for iOS and Android. The game featured a in-game Danganronpa 3: The End of Hope's Peak High School-themed event in the Chinese and Japanese servers of the game in September 2016 and Chinese server in August 2020.

Houkai Gakuen 2 is a side-scrolling beat-em-up, in which the protagonists are attacked by hoards of their ex-schoolmates who have all turned into zombies. The game features a large number of collectable characters, outfits, weapons, skill medals and familiars which can aid them in battle. In the past, the game has featured collaborative events with several popular franchises such as 血族Bloodline and Bilibili, in which players can collect items and weapons based on the series.

From September 9 - September 14 2016 and August 14 2020 - August 30 2020, the game featured a collaboration with Danganronpa 3: The End of Hope's Peak High School. The event featured themed stages in which the player battles Monokumas instead of zombies, cutscenes featuring dialogue from the original Japanese voice cast, and Danganronpa-themed collectable items.

A Monokuma factory mysteriously appears in the world of Houkai School! Kiana was attacked by a Monokuma while shopping. After encountering characters including Hajime Hinata, Kyoko Kirigiri, Ibuki Mioda and Nagito Komaeda, they challenge the huge Monokuma! What heart-pounding excitement! Is it possible for Kiana to solve this "Biggest, Most Awful, Most Tragic Event in the History of the Houkai"?!

During the event period, the Houkai Ronpa (崩壊ロンパ Hōkai Ronpa) event could be selected from the stage list. Completing a quest would reward the player with a

Monokuma Coin, with each coin earned counting as 1 point towards the player's leaderboard score. Ranking up would grant the player increasing rewards, received after the end of the event. Completing additional conditions on each stage would reward the player additional Monokuma Coins, making it easier to unlock the event collectables. Finishing all stages would unlock two cutscenes.

The event featured appearances by Makoto Naegi, Junko Enoshima, Izuru Kamukura, Kyoko Kirigiri, Mikan Tsumiki, Gundham Tanaka, Ibuki Mioda, Nagito Komaeda, Chiaki Nanami, and Miaya Gekkogahara. Each was voiced by their original Japanese voice actor. All character equipments except familiars can be awakened, player can equip main menu character corresponding to the awakened equipment at the Kizuna tab, where clicking on them at the main menu would initiate a random line of dialogue. 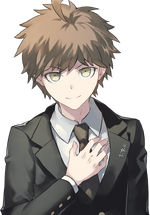 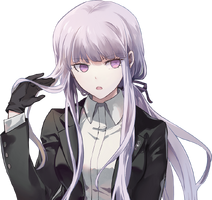 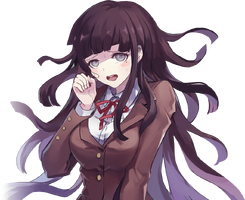 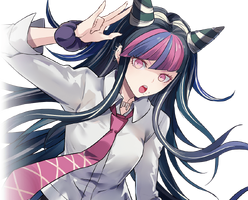 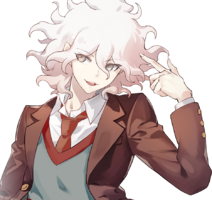 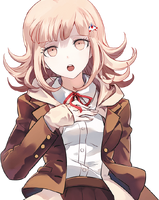 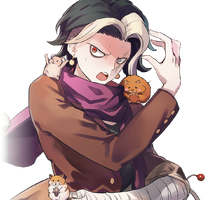 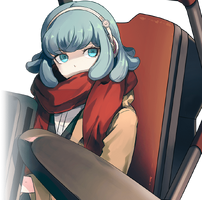 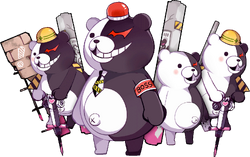 Three enemy types of Monokuma appeared in the themed stages of the event: regular Monokumas who walk on foot, Construction Monokumas in hard hats that ride on bloody jackhammers, and giant Siren Monokumas which are the boss enemy.

Collectible equipment, weapons, upgrade items and profile ribbons were available throughout the event for achieving amounts of points. Additionally, a Monokuma ribbon was also available for the top 1-20% of players in the event.

Equipment to customize your character's appearance and increase their stats.

Notes:
※ Monokuma Sniper was obtained by earning 3,000 points during the event.
※ Monokuma Pistol appeared as a low-rate drop on all Danganronpa 3 event stages.
※ SHSL Light Music Club Member was only obtainable from the gacha machine.

Cosmetic items which can be displayed alongside your profile information.

The collab comes with the 7.1 updates of Houkai Gakuen 2 in the China server. However, in April 2, 2020, the developer announced the cancelation of the event due to licensing issues.

Later, the developer announced an upcoming update (ver 7.5) which will include contents from the previous canceled update. 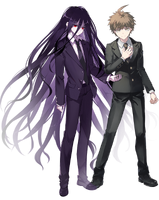 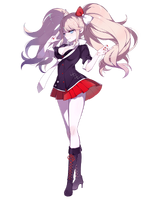 "Even with their help at the Super High School Level."
"This is just a constant despair."
Fight with hope, because...
The biggest and worst desperate event in the history of Houkai is about to come-

The gameplay retains same gameplay experiences as the old version of the collab, with additional of modern graphics that comes with later versions of HG2, new gears, and some existing gears get 7*, and adding new playable character: Junko Enoshima

During the 6th Anniversary of Houkai Gakuen 2, the development team announced that any existing owners of corresponding Awakened gears also get their account avatars.

Danganronpa was the first ever collab in Houkai Gakuen 2 featuring all 7-star gears having 5 more weight (50 vs 45 weight on most of other collab gears), this can cause significant difficulties in gear combination for new players.

Junko Enoshima was a character replacement for Bronya Zaychik in Houkai Gakuen 2. She was sold along with 3000 Crystals in Bundle Shop for 258 Homei Coins (equals to 258 Yuan).

It was also the first character in the game featuring centered familiar cut-in rather than left or right. 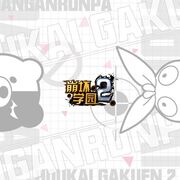 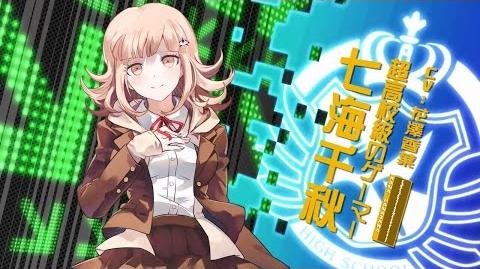