View source
watch 02:52
Roblox: DeepWoken - The Loop
Do you like this video?
Play Sound
Danganronpa 2.5: Nagito Komaeda and the World Vanquisher
Gallery

It is set after Danganronpa 2: Goodbye Despair and before Danganronpa 3: The End of Hope's Peak High School - Hope Arc, with Nagito Komaeda as the protagonist and portrayed as "an ordinary boy" whose bad luck causes good luck for others. Due to suffering a very traumatic death in the program, his mind created a strange, relatively peaceful world he lives in as a coping mechanism. However, it all begins to fall apart after "The Destroyer of the World" appears.

The 25-minute special begins with Nagito Komaeda walking his way into school surrounded by various Hope's Peak Academy students. Sayaka Maizono appears, running with toast in her mouth. She bumps into Nagito, which gets him hit by a car, sent flying into a chestnut tree, which makes a cat fall and scratch his face repeatedly. Nagito laments on how he has the worst luck.

Makoto Naegi appears, giving his hand to Sayaka to help her stand up. Nagito then stands up and heads to school and stumbles into his friends Fuyuhiko Kuzuryu and Kazuichi Soda asking him what happened to him, suggesting that he needs to go to the nurse's office to treat him. After the bell rang, Class 77-B was shown in their homeroom class to begin class; Nagito arrives to class with seemingly worse wounds than before, with Mikan Tsumiki excessively apologizing for what happened. While Nagito was in the nurse's office, someone outside made a home run, hit the window and smashed a cabinet with glass and chemicals in the nurse's office, covering Nagito's face with chemicals. Kazuichi invites Sonia Nevermind to a date to drink at the cafe with him after school. Sonia accepted his invitation, making Kazuichi very excited. However, after school, Kazuichi is nervous and is planning on not showing up, thinking that he's not worth Sonia's time. Fuyuhiko and Nagito rally his spirits, Fuyuhiko saying that a man shouldn't back down on his word, and Nagito saying that even without talent, one can still find happiness. With his spirit up, Kazuichi goes on the date.

Fuyuhiko and Nagito walk off together, where Nagito reveals that he despises talent, and that if he could, he would rid the world of talent altogether, that everyone could be moderately happy if talent didn't exist, which frightens Fuyuhiko. He suggests that they grab a non-alcoholic drink, as he insists, but Nagito slips on a bottle and rolls down the road, ending up in a compromising position with Mikan, which angers Hiyoko Saionji.

Elsewhere, a mysterious boy appears, saying that this world is the lowest stratum, and how dull this world is. Several police officers appear with guns pointed at him, but he begins shooting from his fingertips, killing them.

The next day, it is revealed that Kazuichi died, and the school is there at his funeral. Peko Pekoyama informs Fuyuhiko that Kazuichi was not killed in an accident, but was murdered. Fuyuhiko sets off to avenge his death because Kazuichi was like a brother to him. Sonia also volunteers to join him and Peko. Nagito declines, saying that he would only get in the way.

Nagito decides to confront The World Destroyer in the building where Fuyuhiko, Peko, and Sonia first confronted him. Nagito, despite having no talent and bad luck, still has a feeling that he can win. The World Destroyer claims that what he's feeling is hope, which sounds familiar to Nagito. With one throw of the baseball, he manages to undo all the screws on the building's girders, wanting to take The World Destroyer out with him. With Fuyuhiko's gun, he fires to the side, the bullet ricocheting back to shoot him in the head.

One of the girders that fell on Nagito is lifted, revealing him in his regular attire. The World Destroyer says that the world has been successfully destroyed, and the background then changes. The World Destroyer is revealed to be Alter Ego modified to go into psyches. Nagito's death during the Island Trip of Mutual Killing caused psychological instability, and that instability needed to be eliminated. Nagito's classmates were part of his psyche and a psychological defense mechanism which needed to be eliminated. He is relieved to hear that nothing was broadcast into the outside world, as he's embarrassed that a world without talent may have been one of his true desires.

Nagito finally wakes up in the real world, with Hajime standing above him. Nagito is confused as to whether he is Hajime Hinata or Izuru Kamukura. Hajime replies that he's both and that Nagito was the last one out of all his classmates to wake up.

Nagito joins his classmates on the boat, hugging Fuyuhiko and Kazuichi. Hajime offers his hand, which Nagito takes. It's revealed that he removed Junko Enoshima's hand and replaced it with a robotic one. In the end, he takes Hajime's hand as they move aboard, deciding to go forward towards hope. 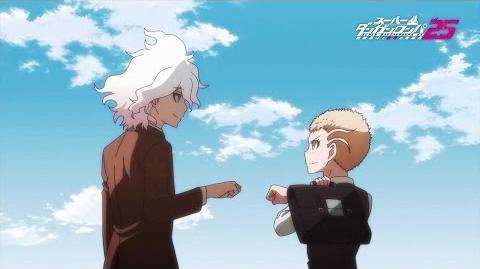