< Danganronpa 1 (Trial Version)
View source
watch 02:40
World of Warcraft: Dragonflight - The Loop
Do you like this video?
Play Sound

Danganronpa kibō no gakuen to zetsubō no kōkōsei (ダンガンロンパ 希望の学園と絶望の高校生) is a Japanese-only short manga adaption of the playable "Trial Version" of Danganronpa: Trigger Happy Havoc.

It came bundled as a bonus for anyone who pre-ordered the game during it's original release on the PSP through certain stores such as GameTSUTAYA and WonderGOO. [1] 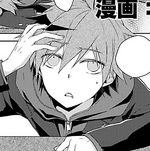 The manga starts identically to the demo version of the game, where Makoto Naegi wakes up and finds that he and 14 other students are trapped in Hope's Peak Academy. A robot bear self-proclaimed Headmaster of the Academy named Monokuma is introduced and informs the students about the Killing School Life they're forced to participate in.

That same day the students find a victim in Makoto's room in the shower room: Yasuhiro Hagakure, with a knife in his stomach. This is also identical to the first case murder of the actual game.

Makoto begins investigate in his room and the murder scene in order to gather clues and evidence while also asking other students. Not too much later, Monokuma announces that they all need to meet up for the Class Trial in order to find Yasuhiro's murderer.

In a similar fashion to the first case of the game (albeit very condensed and not as detailed) it's pointed out how clean the room is as the killer must of used a lint roller, and on the aforementioned lint roller is potato chip grease. Hifumi Yamada is accused of being the Blackened due to this, which he later breaks down and admits to. The students vote correctly for him, after which he goes through his execution: "Kiwotsukete, Buko-hime! Dai Kaijū Shinkō!!".