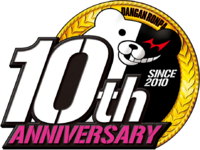 The Danganronpa 10th Anniversary (『ダンガンロンパ』10周年ということで) is a project helmed by Spike Chunsoft to celebrate the 10th Anniversary of the release of Danganronpa: Trigger Happy Havoc in 2020. Over the course of 2020-2021, various series, games, merchandise, and other tie-in media are planned to be announced at least once per month[1].

On April 9th, 2020 it was announced by Spike Chunsoft in Famitsu online gaming magazine that "a lot of new information on games, goods, tie-ins, monthly commemorative programs, etc" would be announced over the course of 2020-2021 to celebrate the 10th anniversary of the series. A new commemorative logo was revealed, and the hashtag "#DR_10th" launched for fans and media outlets to use to discuss and share news on social media[1]. The first major announcement came in the form of a special segment in the Famitsu/Dengeki Game Awards 2019 online stream on April 18th, 2020, in which the three main-line Danganronpa video games were announced to be ported to smartphones[2]. 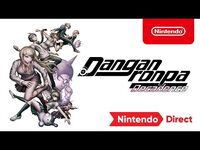