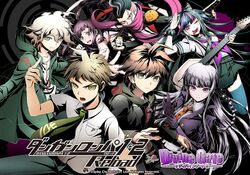 Divine Gate is created by the creators of Puzzle & Dragons, GungHo Online Entertainment, and has a similar premise of using collectible digital trading cards in puzzle-based RPG battles against enemies. Cards are collected in a number of ways: from a gacha called "Scratch" which can be used either using acquired in-game currency or in-game currency purchased with real money, through random drops from enemies during battle, or by evolving their existing cards to higher strengths and rarities. Since the game's inception, it has included collaborations with popular Japanese franchises such as Vocaloid, Attack on Titan, and Puella Magi Madoka Magica, to name just a few. The game has held three waves of Danganronpa 1.2 Reload collaborative events since 2015, featuring 16 characters over 33 cards.

A set of 6 Monokumas with different type advantages, which appeared as common enemies during battle but could be obtained as cards. Their primary use was as a requirement to evolve the other characters from the wave.