View source
watch 02:46
The Quarry - The Loop
Do you like this video?
Play Sound
Danganronpa: Trigger Happy Havoc
Gallery
Trophies

Danganronpa: Trigger Happy Havoc, known in Japan as Dangan Ronpa: Academy of Hope and High School Students of Despair (ダンガンロンパ 希望の学園と絶望の高校生, Kibou no Gakuen to Zetsubou no Koukousei), is a Japanese visual novel game developed by Spike Chunsoft. It is the original main title in the Danganronpa series.

A promotional demo called ''Dangan Ronpa: Kibō no Gakuen to Zetsubō no Kōkōsei (Trial Version) was released exclusively in Japan on October 10th, 2010.

The game was later re-released with additional content as part of the Danganronpa 1.2 Reload collection on the PlayStation Vita, PlayStation 4, and PC with Danganronpa 2: Goodbye Despair. A port of this collection was launched for Android and iOS devices for Japan on August 20th, 2020, then worldwide on May 21st, 2020 as part of Danganronpa 10th Anniversary celebration. On June 15th, 2021, it was announced that Danganronpa: Trigger Happy Havoc would be released on the Nintendo Switch as a physical-only bundle for Danganronpa Decadence, or individually in the Nintendo e-Shop. In January 17th, 2022 the game was announced for Xbox One, Xbox Series S & X and Windows 10 as a digital only download as well as Microsoft's gaming subscription: Xbox Game Pass & PC Game Pass.

"Hope's Peak Academy is home to Japan's best and brightest high school students — the beacons of hope for the future. But that hope suddenly dies when Makoto Naegi and his classmates find themselves imprisoned in the school, cut off from the outside world and subject to the whims of a strange, murderous little bear named Monokuma. He pits the students against each other, promising freedom to anyone who can murder a fellow classmate and get away with it. It's up to you to find out who Monokuma really is, and why you've been taken from the world you once knew. But be careful what you wish for — sometimes there's nothing more deadly than the truth..." - Official synopsis [1][2]

In Danganronpa: Trigger Happy Havoc, the player controls Makoto Naegi, a student at Hope's Peak who is forced into a killing game with other students. Each chapter is divided into two parts: School Life, in which the player can explore the academy and progress through the story, and the Class Trial, in which the player must deduce the culprit of a murder.

During School Life, the player can explore the school grounds in a first-person perspective. In certain locations, the player moves a crosshair cursor to converse with other characters and interact with various objects. Examining specific objects yields the player Monocoins, which can be redeemed for presents from The All-Mighty Monomono Machine located in the school's store. As the game progresses, more areas in the academy become available, along with places that were sealed off in the previous chapter(s) on accessible floors.

Once a murder has occurred, the game transitions into Deadly Life, where the player must look for clues throughout the academy. Evidence and testimonies, or "Truth Bullets," are stored in the player's e-Handbook. After all possible Truth Bullets are found, the game shifts to the Class Trial.

In a Class Trial, the students must discuss among themselves who the killer is. The game’s logic difficulty will determine how the facts are shown and how logical they are (the logic difficulty can be changed in the settings at almost anytime). The Class Trial consists of four main game modes: Nonstop Debate, Hangman's Gambit, Bullet Time Battle, and Closing Argument. The most common of these is the Nonstop Debate, in which characters will discuss their thoughts on the case. During these sections, the player is armed with "Truth Bullets," metaphorical bullets containing evidence relevant to the case. To break the debate, the player must find a lie or contradiction among the "weak points" (words highlighted in yellow) in the characters' arguments and shoot them with the correct truth bullet. In Hangman's Gambit, the player must shoot specific letters to spell out a clue. Bullet Time Battle is a one-on-one debate against another student featuring rhythm-style gameplay. As the opponent makes remarks, the player must press buttons in time to the beat to lock onto the remarks and shoot them down. To close out the case, "Closing Argument" is a puzzle in which the player pieces together a comic strip depicting how the murder went down.

Occasionally, the player must answer a multiple-choice question and present a shred of evidence to progress through the Class Trial. The player's "Influence" among the other students is represented by hearts, which are reduced whenever the player makes errors in shooting contradictions or presenting evidence and are slightly replenished once the player does otherwise. The game ends if the player loses all their "Influence" or runs out of time during a segment. At the end of a trial, the game ranks the player's performance and rewards them with Monocoins.

When the player completes a chapter, a screen with outlines of every student's silhouette appears. Text at the top of the screen displays "Surviving Students"; though moments later, the casualties' sprite colours change to show their status change from alive to deceased as the number on the bottom changes accordingly to the number of surviving students.

DISTRUST was a visual novel devised by writer-director Kazutaka Kodaka. The general premise was "15 teenagers killing time or our 7 days survival war" (15少年少女殺戮期 もしくはボクらの7日間生存戦争), and was co-developed by Kodaka alongside Spike Chunsoft (then Spike) producer Yoshinori Terasawa and character designer Rui Komatsuzaki between 2007 and 2009. The game featured realistic blood in a gritty, industrial, post-apocalyptic environment inside the school building, and a subdued colour palette. During development, it was determined that the gruesome aesthetic of this prototype, along with the small market share of the niche PlayStation Portable console, made the game potentially unmarketable and the game's development was ultimately scrapped. Despite the cancellation, the game was reworked by the team into what later became Danganronpa: Trigger Happy Havoc, which shares many similarities with it's cancelled predecessor, with many character names, designs, and the overall premise of the story being carried forward.

Danganronpa: Trigger Happy Havoc Has received favourable reviews in Japanese game media and was awarded a pre-release rating of 36/40 by Famitsu.[17] The English localization of the game has earned a Metacritic review aggregate score of 80 for the PS Vita release[18] and a score of 82 for the PC port,[19] indicating generally favourable reviews.

Review scores for the original PS Vita release in English on February 11, 2014.

Danganronpa: The Animation (ダンガンロンパ: The Animation) was a faithful but abridged 13-episode adaptation of Danganronpa: Trigger Happy Havoc produced by animation studio Lerche, which featured the original Japanese voice cast of the game returning to voice their characters. The series debuted on July 4, 2013, and was simulcast with English subtitles by Funimation on their streaming platform. Later, fully translated dubbed versions of the series were released in English by Funimation on November 9, 2015, and in German by FilmConfect from August 26, 2016. The series has also been subtitled in German, French, Italian, and Spanish.

Because the adaptation was subtitled by Funimation at the same time as the game was being translated by NIS America, both the English subbed and dubbed versions of the anime have a separate canon from the game in terms of certain terminology, most notably character talents being literally translated as "Super High School Level" rather than "Ultimate", and character names such as Mondo Owada being romanized as Mondo Ohwada. Despite criticism from some fans for its diversion from the games, the localisation style was maintained in the anime series' 2016 sequel, Danganronpa 3: The End of Hope's Peak High School, for consistency reasons.

Danganronpa: Trigger Happy Havoc has been adapted into a stage play in Japan by theatre production company Cornflakes. There have been two separate productions of this play, once in 2014 and again in 2016. 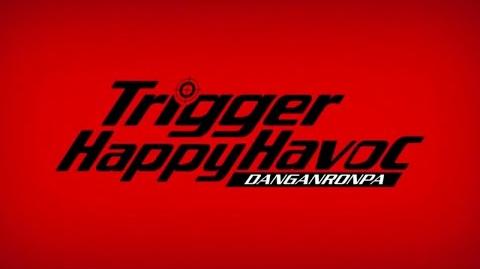 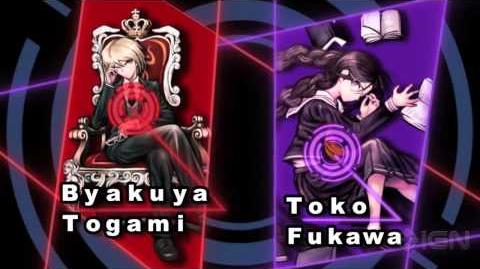 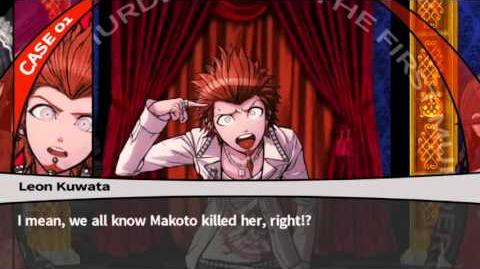