Welcome to Despair Academy (ようこそ絶望学園) is the debut episode of Danganronpa: The Animation, the anime adaptation of the video game Danganronpa: Trigger Happy Havoc.

The episode was originally broadcast in Japan on July 4th, 2013, and was simulcast with English subtitles by Funimation the following day.

Makoto Naegi gets a super lucky break and enters the highly prestigious school, Hope's Peak High School. But things take a turn for the worse when Makoto learns that he's trapped in that school for the rest of his life unless he kills a classmate!

A voice begins speaking over the school tannoy, and suddenly a black and white bear appears on the podium on the stage. He introduces himself as Monokuma, the school's headmaster. Monokuma states: "Overflowin' with potential, you high schoolers...are none other than the hope of the world! In order to protect our wonderful rays of hope, yer expected to live here on campus and nowhere else! (...) In other words, yer gonna spend the rest of yer lives in here! (...) For those of you who wanna leave I've established a certain rule! You are free to murder however you like. The only student permitted to leave is one who has committed murder. It's a simple rule, and the only one. Beat! Stab! Club! Slice open! Torch! Crush! Strangle! Cast a curse!"

The students are understandably confused and shocked by this revelation and begin shouting at Monokuma for an explanation. Mondo, furious, threatens Monokuma and grabs him by the throat. Monokuma begins to flail, telling Mondo that violence against the headmaster is against school rules. This violation of school rules prompts Monokuma to explode, which would have killed Mondo had he not thrown Monokuma away at Kyoko's instruction. Seconds later, another Monokuma appears from behind the podium and tells the students that if any more rules are broken, they would be punished. He dismisses them and quickly disappears behind the podium. The students are left questioning whether they really did have to kill each other, and whether they can trust this group of strangers. The students break off into groups to try and find a way to escape, although none of them were successful. Byakuya announces that he would be searching alone in case anyone tried to kill him. This selfishness infuriates Mondo and he squares up to fight Byakuya. Makoto tries to intervene, but instead Mondo punches Makoto for telling him what to do. Makoto is knocked unconscious.

Makoto wakes up in what he learns is his new dorm room with Sayaka by his side. She explains that he had been carried to his room after he was knocked out, and that she had volunteered to stay with him after everyone else went to look for an escape. Sayaka insists that she will be Makoto's assistant from now on as they work to find a way out, and Makoto agrees. The pair join the rest of the students at a meeting in the cafeteria. Mondo and Makoto forgive one another. The students share what each group learned during their investigations: The futuristic exit door is sealed tightly closed and could not be forced open, the stairways are sealed with iron bars, each student has their own comfortable bedroom, and that the kitchen is fully stocked and would be refilled daily with no risk of starvation. Celestia proposes that everyone stays in their room after 10pm for safety.

The next day, at a second student meeting after further investigation of the school grounds, Monokuma gatecrashes and reveals his first motive: a DVD for each of the students that he has left for them in the A/V Room. The students go to the room, which is full of monitors, and find a labeled DVD for each of them. Makoto takes his DVD and watches it, finding a scene of his His sister, mother, and father congratulating Makoto and wishing him well at his new school, sitting in Makoto's home.

Suddenly the scene in the video shifts to another shot of the same room, but the room is destroyed and his family are nowhere to be seen. Horrified, Makoto looks to his other students, finding Sayaka in a state of severe shock at what she had seen on her own DVD. Sayaka begins screaming and flees the room, pursued by Makoto. He finally catches up to her in the hallway, and Makoto reassures her that if they all work together they will all be able to escape, promising her than he will do anything to get her out. Sayaka throws herself into Makoto's arms and wailed while the other students watched on. 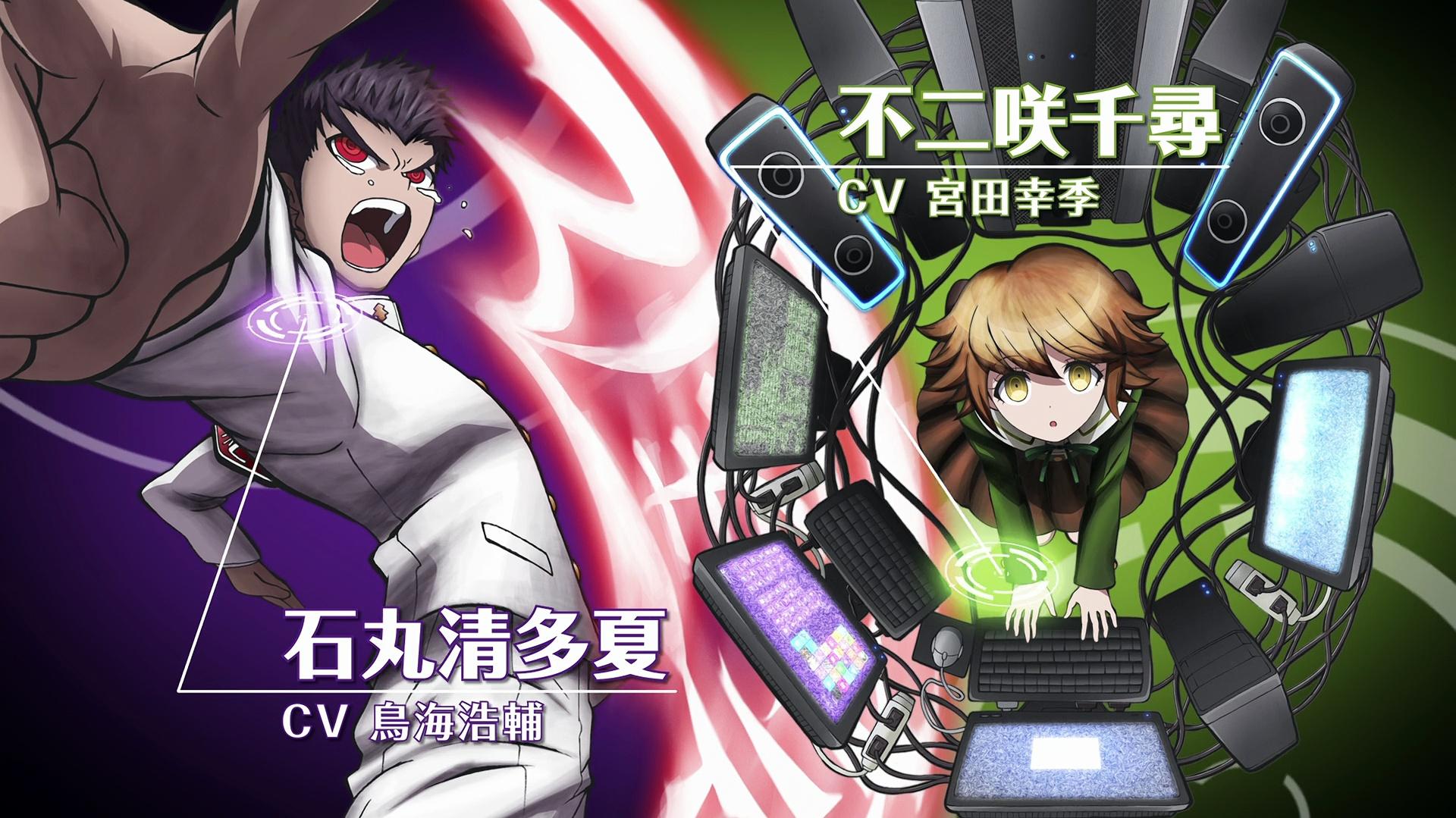 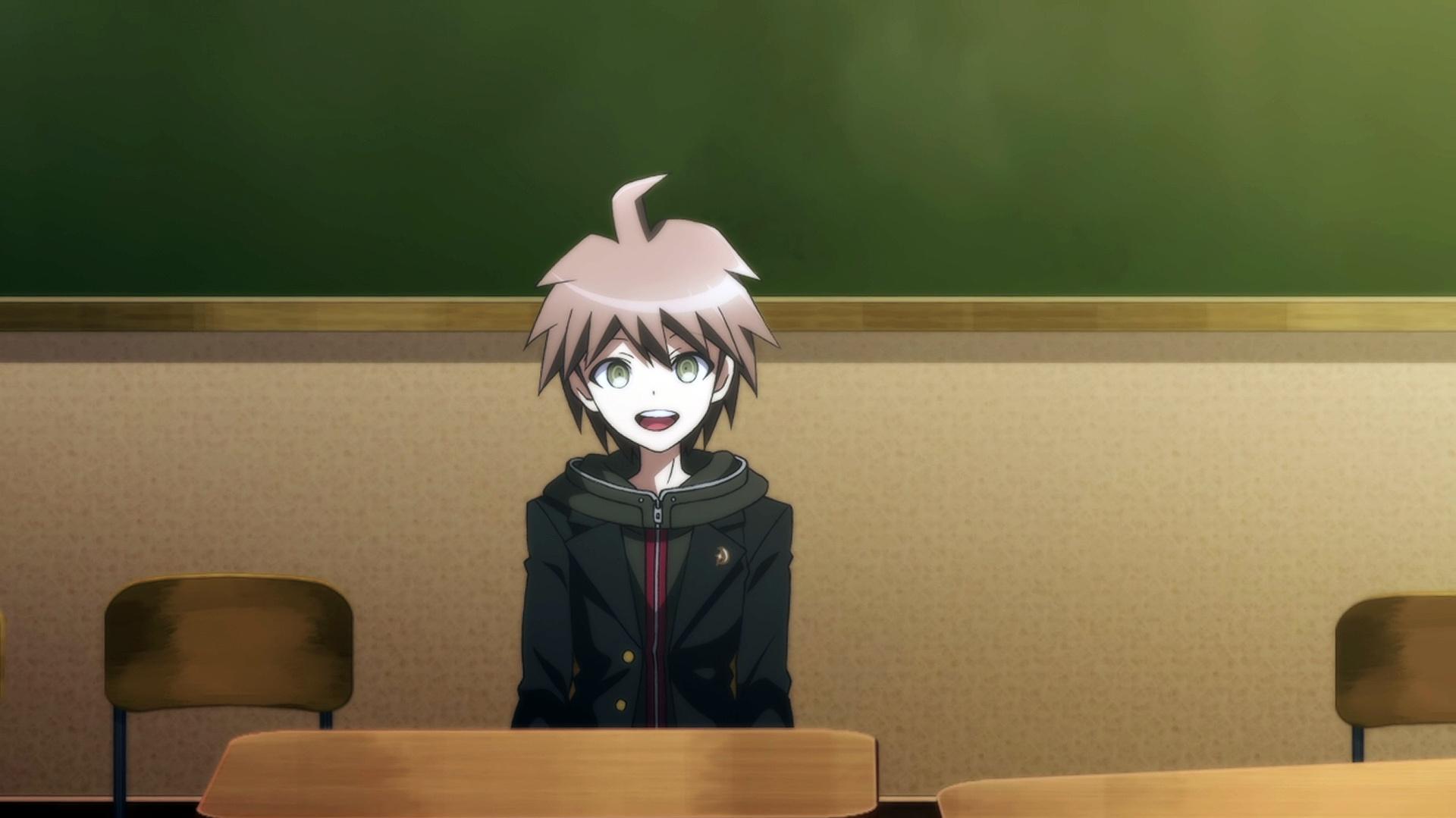 Retrieved from "https://danganronpa.fandom.com/wiki/Danganronpa:_The_Animation_-_Episode_01?oldid=331083"
Community content is available under CC-BY-SA unless otherwise noted.