View source
watch 02:40
World of Warcraft: Dragonflight - The Loop
Do you like this video?
Play Sound
DISTRUST
Gallery

DISTRUST (ダンガンロンパ DISTRUST), was a prototype murder mystery visual novel developed by Spike for the PlayStation Portable. The game was scrapped and never released because it was too gruesome,[2] but many elements of the project were redeveloped into Danganronpa: Trigger Happy Havoc.

Before development began on DISTRUST, Spike had two-year period from October 2007 - October 2009 where most of the company's releases were either sequels or adaptations of existing franchises, with very few new original titles. This led to a drive to develop some new intellectual properties.

Kazutaka Kodaka gave a game proposal to producer Yoshinori Terasawa, with a general outline of "15 teenagers killing time or our 7 days survival war" (15少年少女殺戮期 もしくはボクらの7日間生存戦争)[1]. At this early stage, emails sent between Kodaka and Terasawa show that the idea of "Psychopop Highschool Detective Mystery" (サイコポップ 学園推理ミステリー), the main concept of the Danganronpa franchise, was already formed. The game was a pure visual novel, containing none of the action elements of the final game.[3] Kodaka continued to develop the game into a "High Speed Reasoning Action" genre, with 2.5D motion graphics, and trial system where the students are executed by majority voting. The game featured red blood, and gruesome executions.

The game was intended for Sony's PSP because of the lower development costs, and because the system was very welcoming for unique games. However, the low sales figures for PSP games and the niche genre meant that it would be difficult for the game to be profitable.[1]

The more gruesome aesthetic of this prototype version of the game and the seeming lack of marketability led to DISTRUST's cancellation, until it was later reworked further into what became Danganronpa: Trigger Happy Havoc.

The characters shown in images from a presentation of DISTRUST are prototype designs of the main characters of Danganronpa: Trigger Happy Havoc.

Some characters were given different names before their final name was chosen:

Monokuma's original design, known as "Phantom", was distinctly human, with visible internal organs. Despite being very different from the bear design seen from Danganronpa: Trigger Happy Havoc onward, the original design still featured the split half-black, half-white design. Despite being humanoid, according to producer Yoshinori Terasawa, Monokuma was always intended to be a robot.[3]

While little footage or materials of the game have been released to the public, some noticeable changes from the final version of Trigger Happy Havoc were visible in the presentation materials:

One of the only videos circulating which feature in-game footage is an execution of Kazuo Matsuzaki (who would later be renamed Leon Kuwata) after he murdered Kyoko Kirigiri (originally named Gyaru Kirigiri). This execution is very similar to the final version of Kazuo's execution, although this version features a scrolling selection instead of the slot machine, notable red blood and Leon's visible corpse at the end of the execution. 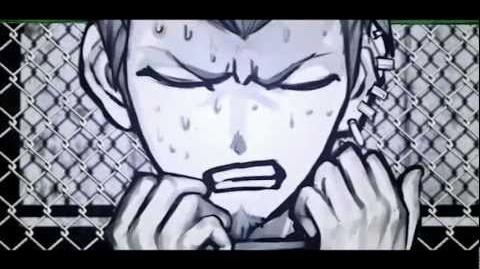